Though he holds a British passport and is an inductee of the British Blues Hall of Fame, Matt Schofield has been making his mark globally as one of the top players in the new class of six string wunderkinds.

The Los Angeles Daily News wrote, ‘ In Schofield, the UK has produced the best Blues guitarist from any country in decades… head and shoulders above the herd’, while Guitar & Bass Magazine rated him in the top ten British blues guitarists of all time ranking him with icons Eric Clapton and Peter Green.

Born in the industrial city of Manchester and raised amongst the rolling hills and locked in time Cotswolds, Schofield began playing guitar at the age of 12.

“My dad relocated to America, but before he left he gave me a BB King video. I watched it before school every day; it was three or four tracks from a concert. Later, when I was in California with my father, he showed me BB King with Albert Collins and Stevie Ray Vaughan on video”.

“It was like; I’ve got to do this. There’s something about the way the three of them were jamming. B.B. really was majestic. As an 11-or 12-year-old watching him, I was mesmerized but didn’t think there was any way I could ever do that. It was too special. But when I saw Stevie Ray Vaughan playing with him, I thought maybe I could. Stevie made it seem accessible to people. I taught myself, working my way through my Dad’s great blues record collection. I did my first gig age 13, and I’ve been doing it ever since”.

At age 18 he left the countryside and moved to London. There, as a sideman, he was able to hone his skills as backing a great variety of experienced and well known artists of the British Blues scene, visiting American artists, as well start touring internationally.  The introspective, well read (lover of science, history and philosophy) and passionate Schofield said, “this enabled me to stay close to my roots while learning my trade and exploring a variety of musical frontiers.”

“By age 25 I was starting to explore my own band projects. Although my formative guitar influences are the largely the old school blues players, I never wanted my own music to be constrained by a rigid formula, or even genre. I just want to play ‘Matt Schofield music’. Classic Jazz, funk, soul and rock and all the music I love have all found their way into it. The process of writing and singing has become increasingly important to me, and I feel it’s those other aspects of creativity that helped define my own voice on the guitar. It’s always been important to find a context for the guitar to be part of, so that it’s not just guitar solos for their own sake.

“I remain a music lover first and foremost. The recognition I’ve received from both fans and peers is humbling and inspiring, and those ‘pinch me’ moments where I found myself trading licks with heroes like Robben Ford and Buddy Guy are still the biggest thrill.”

“Now after five studio albums and a solid 10 years of touring with my own band, I have definite broader concepts I want to explore. Remaining open to where the music might take me while maintaining the excitement that improvising and collaborating with talented musicians allow, is key to me. My inspiration and goals came from many places: My influences old and new, including musicians I have wanted to collaborate with for years. Things I still feel I hadn’t fully realized on previous studio records, and a need to keep pushing myself. It all meets at the place where I’m heading now. I’m always aiming to go as far as possible to capturing the same connection with the listener that I aim to make at a live show or on record. That’s the goal. Capturing that special moment.”

Matt is signed to the Mascot Label Group, which is home to some of the world’s most respected guitarists.

In the decade since he burst upon the national scene by winning 1st place in the Blues Foundation’s 2009 International Blues Challenge in Memphis, TN with his band the Red Hots (and the prestigious Albert King Award as best guitarist), Arkansas native J.P. Soars has toured extensively through the United States, Canada, South America and Europe, and released an impressive catalog of powerful music. In addition to his work with his own Red Hots, Soars has been part of the regional all-star blues act Southern Hospitality, also featuring Tampa vocalist/guitarist Damon Fowler and 2019 Grammy nominee, Memphis vocalist/keyboardist Victor Wainwright, plus Red Hots drummer Chris Peet and Wainwright’s bassist Terrance Grayson. The Band’s 2013 Blind Pig release, “Easy Livin’” earned a Blues Blast Award for “Best New Artist Debut Release”, and they toured worldwide in-between the three bandleaders’ own schedules.

Soars was featured on an album by Jimmy Thackery and the Drivers, and has released five albums on his own and with the Red Hots, most recently the critically acclaimed SOUTHBOUND I-95. Brian Owens of Blues Music Magazine writes: “Make sure you have a fire extinguisher handy when you play Southbound I-95, cause J.P. Soars and his gang are on fire.” Steve Ovadia of American Blues Scene writes, “Soars’ voice and guitar are the glue that holds the album together. Both are the common thread through the various songs and both inject all of the tracks with a warmth and humanity. J.P. Soars is much more than just a gun-slinger.”

J.P. is psyched about his upcoming release, recorded during a whirlwind weeklong session at Tab Benoit’s Whiskey Bayou studios, with a band featuring Red Hot’s drummer Chris Peet on bass, and Benoit on drums, they recorded twelve songs in five days – eight originals which they wrote on the spot, plus four choice covers. The inspiration for the album came from the many nights they all spent jamming into the wee hours on the Legendary Rhythm and Blues Cruise and at the Big Blues Bender, and as expected, they captured many magical musical moments on this record.

Florida’s Gulf Coast has produced a plethora of distinctive musicians, from the blues of Tampa Red to jazz greats Cannonball and Nat Adderley to former Allman Brothers guitarist Dickey Betts to The Outlaws. Tampa’s Damon Fowler, a masterful singer, guitar player and songwriter, has absorbed the best of and furthered the work of the region’s definitive artists. A hard driving troubadour, his music is steeped with soul and representative of the many styles that make up the roots of American music. He has gained the respect of his peers given his featured slot in Butch Truck’s Freight Train band and his side gig as guitarist in the Dickey Betts Band. Critics have compared Fowler’s guitar work to Johnny Winter and Jeff Beck, while his slide guitar is reminiscent of the late Duane Allman. Fowler can play fiery guitar runs with the best of them, and his lyrical work on lap steel and dobro makes him a stand out performer among the legions of guitar heroes. His new release, ALAFIA MOON, was produced by Fowler and George Harris (Cheap Trick, Rick Derringer, Brian Johnson—AC/DC), ALAFIA MOON, represents Fowler’s 8th solo release. combines all the influences that have shaped his distinctive blues career. On the strength of Fowler’s hybrid of roots rock, blues, and sacred steel, the Florida native started wowing audiences with his musical exploits as a teenager, building a reputation as one of the hottest young players on the scene. Adding songwriting and vocal skills to his repertoire over the years has brought him many accolades, with music journalists extolling his originality and maturity as well as his technical guitar expertise. All of these attributes have helped further define Damon Fowler as one of the great Southern artists of his time.

He picked up the instrument as a teenager when he started playing in a punk rock band. His journey started in earnest when he watched and later was mentored by legendary harmonica player Pat Ramsey in Memphis. As Ricci gigged and grew as a player he found work and support from the southern blues community. He lived and played with Junior and David Kimbrough in Mississippi and then worked as a sideman with Big Al and The Heavyweights for more than a year. In the late 90s, he formed Jason Ricci and New Blood, a band that toured around the world for more than a decade and released critically praised albums like Done With The Devil and Rocket Number 9. Ricci’s latest chapter is the New Orleans band Jason Ricci and The Bad Kind, a band influenced by the sounds of New Orleans and artists like The Meters and Doctor John. What defines Jason Ricci as an artist is the fearlessness with which he approaches his instrument and music and transmutes the hardships we all face into unforgettable music. 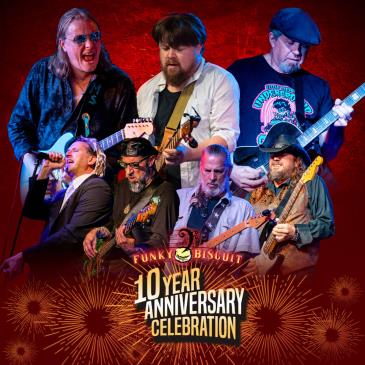 The Funky Biscuit All Stars