LA GENTE SF is a San Francisco based, international recording group led
by singer-songwriter Rafael Bustamante Sarria. The group has created
their own unique blend of World Music, Cumbia, Reggae, Salsa, Hip-Hop
& Reggaeton. LA GENTE SF fuses together rhythms and cultural influences
from all over the Caribbean with their distinct Bay Area flavor and style
to create an infectious, high energy dance party.

After years of touring and creating new music, LA GENTE SF has built a large and loyal following all over the US and the globe. The group’s most recent fourth album "Borderless" features special guest Deuce Eclipse of Bang Data and Zion-I. They also just released a new single in 2019 as part of the UnderCover Presents Tribute to A Tribe Called Quest. The group collaborated with Awesome Orchestra (a full 50 piece orchestra) to create a Cumbia, Salsa, Reggaeton interpretation of the Tribe classic: Award Tour. LA GENTE SF was founded in 2007, since then They have performed numerous festivals, universities, radio stations, museums, art galleries and major venues all over the US. For example: San Francisco, Los Angeles, New Orleans, Austin, Portland and New York. LA GENTE SF has also performed internationally in Spain, Italy, France, Great Britain, Colombia, Mexico, Brazil, Chile, Nicaragua and are preparing for a month long tour in Europe this summer.

Their notoriety and showmanship had found them sharing the stage with other recognized recording artists, such as George Clinton and The P-Funk All Stars, E-40, La Santa Cecilia, Quantic, The Digital Underground, Hyro-Glyphics, Coolio, Digable Planets, Pato Banton, Lyrics Born, Pete Escovedo,
and MALO.

In a city that thrives on its diversity, sun-soaked California retro-soul band Midtown Social unites a fractured San Francisco undergoing swells of monumental change with an uplifting and outright funky new full-length studio album, Fantastic Colors, due out nationwide on Valentine’s Day 2020. Midtown Social is of the fabric of San Francisco with its members representing the wide swathes of what makes the city so extraordinary. For its latest studio recording co-produced by Jeff Kolhede (Money Mark, Alphabet Rockers), Midtown Social writes a love letter to its hometown amid a perilous time when reverence is essential for collective healing. Drastic income disparity, sky-rocketing rents, profound homelessness, acute drug abuse, among other critical issues, are rendering the city unrecognizable. On Fantastic Colors, Midtown Social offers a compassionate reflection of its true love for San Francisco.

In Cirques past you knew them as Cabaret de Caliente, this year they return as ShowGirl Temple to bring you an even more stunning and delightful set of saucy Burlesque and Variety Arts!  Watch out for Cast and Costume Contest announcements coming soon, including a large group category! 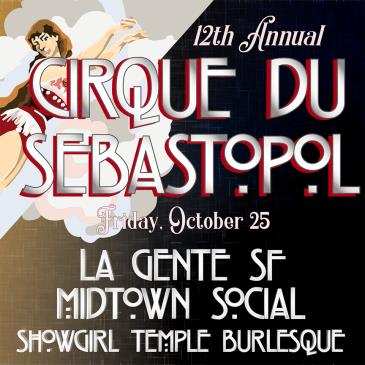