45th Anniversary of The Sex Pistols at Randy’s Rodeo

Saustex Records and Tex Pop (in Exile) are pleased to announce an extraordinary one-day event in San Antonio, Texas, on Saturday, January 7th, at Paper Tiger: The Filth and The Flautas Redux - A Celebration of The Sex Pistols at Randy’s Rodeo. Four and a half decades after The Sex Pistol's appearance in San Antonio remains one of, if not the most storied show of one of the most storied rock’n’roll bands of all time. Rather than a simple tribute show, there will be a variety of happenings within the event that will serve to contextualize and preserve the legacy of the event, including:
Live music by The Sons of Hercules (featuring singer Frank Pugliese of The Vamps, who opened Randy’s show), Hickoids (performing the Pistol’s set from 01.08.78), Ty Gavin (singer of San Antonio/Austin first-wave punk icons The Next performing the band’s material), Jefferson Trout (co-fronted by Buxf Parrot of Texas punk legends The Dicks and Dotty Farrell of The Punkaroos), The Babylon (a new San Antonio act that carries the tradition of the New York Dolls and Heartbreakers), The Cuntry Killers (an artful and chaotic all-female “revenge” cowpunk act from Austin) and Z-Pocalypse (San Antonio teen band who sprung out of The High Voltage Music Program and carried the spirit forward.)
An oversized photo exhibit featuring dozens of never published and previously unseen-by-the-public photos taken at the 1978 show by Lindell “Tiger” Tate and Ken Hoge, as well as photos taken by Danny Grace at the Taliesyn Ballroom in Memphis only a few days previous. (Limited-edition prints of the photos will be available for sale.)
A screening of Jimmy Mendiola’s film ‘Pretty Vacant’. The new print of the thirty-three and one-third-minute-long 1998 film is a reimagining of the happenings on the day of the  1978 show.
An oral history project conducted by the University of Texas at San Antonio wherein attendees of the original show will have the opportunity to share their remembrances and have them recorded and archived for posterity.
A panel moderated by noted by punk archivist and author David Ensminger featured members of the opening bands and other participants of the 1978 show.
Additionally, there will be a limited number of vendors with both vintage and new items of relevance.
And perhaps best of all -- a healthy portion of the show’s profits will benefit the High Voltage Music Program and Tex Pop. High Voltage is a non-profit after-school program that serves kids 12-18 years old in the San Antonio area, putting instruments in their hands and offering free music instruction. Tex Pop is a repository of information and ephemera that seeks to preserve the musical history of South and Central Texas with an emphasis on San Antonio. Both are 501c3 registered non-profits, founded and run by women and, based in San Antonio. 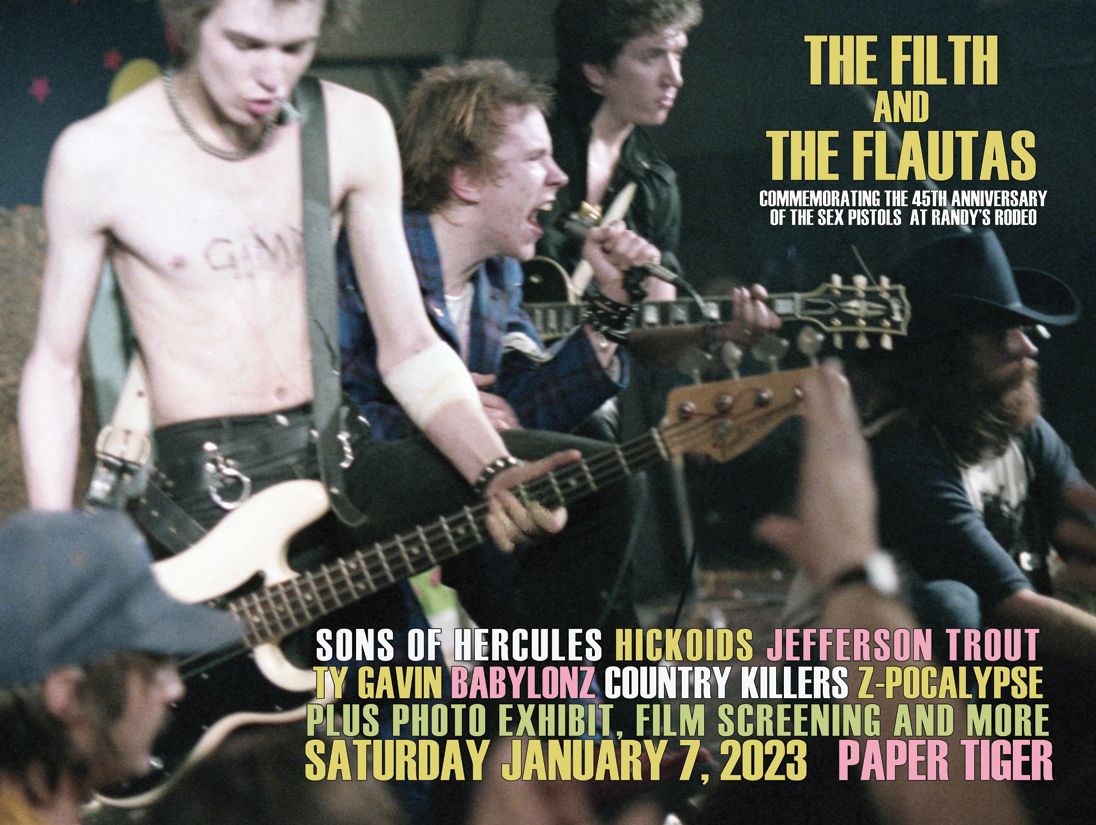