With its latest album, “Fortune Favors The Bold,” Russell County, Virginia-based 49 Winchester is ready and roaring to break onto the national scene with its unique brand of tear-in-your-beer alt-country, sticky barroom floor rock-n-roll, and high-octane Appalachian folk.

“As we’ve aged and matured, our sound has gone from a softer place to this grittier, edgier tone that we have now,” says lead singer/guitarist Isaac Gibson. “So, we’re trending more towards being a rock band instead of a country band. But, at the same time, I don’t think anybody’s ever known quite what to call it.”

Although it’s 49 Winchester’s fourth studio album, “Fortune Favors The Bold” marks its debut for Nashville’s New West Records — one of the premier labels for Americana, indie and rock acts on the cutting edge of sound, scope and spectacle.

Formed eight years ago on Winchester Street in the small mountain town of Castlewood, Virginia (population: 2,045), the band started as a rag tag bunch of neighborhood teenagers who just wanted to get together for the sake of playing together.

“From day one, it’s always been a band and it will always be about being a band. This is everything, everything we love about music — we’re going for broke with this thing,” says Gibson. “And that gives us a unique perspective because it’s still the same guys. It’s still all of us from Castlewood traveling around, playing music and making this band a reality — this is a story of growth.”

And it’s that sense of growth — more so, a sense of self — at the core of “Fortune Favors The Bold.” It’s not only a record that showcases the current state of 49 Winchester, it’s a melodic stake in the ground of how this group is constantly evolving and taking shape, sonically and lyrically.

Reflecting on his early days as a jack-of-all-trades stone mason in Castlewood, where it was about trying to make ends meet in an effort to keep 49 Winchester rolling along, Gibson can’t help but be grateful for a well-earned notion at the core of the band’s ethos — anything worthwhile in life is built brick-by-brick.

“Everything has to be built. And very few people are going to achieve success overnight,” says Gibson. “There’s going to be people you see succeed in front of you. Maybe you don’t think they deserve it as much as you, haven’t worked as hard as you, haven’t done it as long as you. But, none of that matters — they ain’t you. They’re not living your life. They’re not part of your experience.”

At its essence, “Fortune Favors The Bold” is about going against all odds to bring your art into fruition and into the world. It’s about leaving your hometown and heading for the unknown horizon. And it’s about proving those wrong who snickered and waited for the day you’d give up somewhere down the line, only to circle back home with your tail between your legs.

But, it’s also about looking into the rearview mirror with a genuine appreciation for where you came from and what you’re made of, those hardscrabble, salt-of-the-earth traits in your blood and character that define what it actually takes to climb that damn mountain of dreams — come hell or high water. 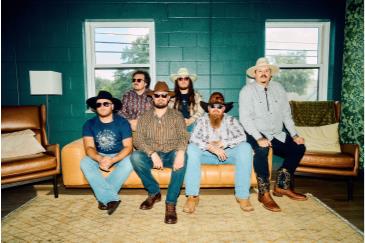