A WORLD OF FUNK with Sonamo and Fell Swoop

A WORLD OF FUNK

Sonamó - Italian Funk
if Sting and Jamiroquai had a lovechild they would name it Sonamó. With a dynamic, passionate blend of melodic lines shot through with hefty doses of R&B, funk, and acid jazz, Sonamó music is both danceable yet introspective, at once familiar yet exotic, intense yet energetic, romantic and yet somehow carefree. One of the strongest characteristics of Sonamó is their high energy that’s well expressed in their memorable live performances. www.sonamomusic.com

Fell Swoop - Vintage Funk
The Fell Swoop is a soul/pop/funk big band from San Francisco. Its ten members came together to make music that is colorful, horn-forward, retro-inspired yet forward-looking. The band has made audiences sweat through their clothes at shows in places as distant as Austin during South by Southwest in 2018 and as big as the main stage at SF Pride in 2019. www.thefellswoop.com

DJ Nino MSK - Eclectic Funk
Rhythmic elegance, oblique vibes. Sensory bliss, motion to dance. Nino Msk, the Italian-born, SF-based producer behind Italic Disco is known for is work in the city with community and non-profit radio. He has created 200+ episodes of his weekly podcast, Espresso Sesh on BFF.fm (SFWeekly Best Radio Station 2013-19) and maintains an 8-year residency at The Revolution Cafe in the Mission. Italic Disco was conceived as an outlet for Nino’s uptempo, electronic-driven, disco-inspired productions, in which he mostly uses analog drum machines, synthesizers, and samplers. Italic Disco has performed at Burning Man events in Black Rock City and SF, including Pre-compression and Decompression. www.msk.fm 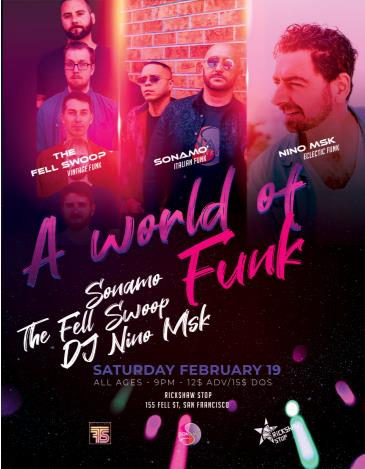