Alfie Templeman knows music. At just 17, this boy wunderkind already has four EPs to his name, and an encyclopaedic knowledge of music history that some veteran artists would envy. He's been called a "bedroom producer," and that's true -- all of his songs were crafted at home in the small village of Carlton, Bedfordshire. "It's kind of boring," Templeman says cheerfully. "I live in a nice place and everyone's friendly and supportive, so I'm lucky. But there's not a lot to do, so that's one of the reasons I got into songwriting." But where many young artists create tracks from pre-made samples, Templeman is more likely to pick up one of the 10 instruments he taught himself.

His gigs, including a sold-out London show at COLOURS in Hoxton, are raucous affairs, filled by screaming fans only too happy to catch him whenever he hurls himself offstage. After a string of UK performances last year, including his triumphant Radio 1 Introducing Set at Reading and Leeds festival, he's eager to get back to it.

And why wouldn't he be? 2020 has already seen the release of his best EP to date, the irrepressible Happiness in Liquid Form, which has achieved millions of streams -- not to mention praise from the likes of The Guardian and NME. Templeman refers to the title track as "colourful sugary disco pop," but there's plenty more to love besides that. Writing with Justin Young of The Vaccines fame has instilled a new confidence in Templeman's songwriting. You can hear it in the cheeky bounce of "My Best Friend" -- which will remind listeners of Billie Eilish's insouciant charm -- and the infectious Caribbean sound on "Things I Thought Were Mine."

"I listen to everything!" Templeman says, explaining how he came to have such a broad range of references. This is a teenager who will just as happily discuss John McLaughlin and Miles Davis as he would The Weeknd and Harry Styles. "I think some people might consider me as 'just' an indie artist, but my music is a broad mix," he continues. "There are modern influences, but also a lot of prog, classic jazz, funk... I like to play things that people don't expect, that hit you right in the feels."

There's a 6 ticket limit per customer/account/household/email/credit card/address. Orders exceeding the 6 ticket limit subject to cancellation. Orders place for the sole purpose of resale will be cancelled. 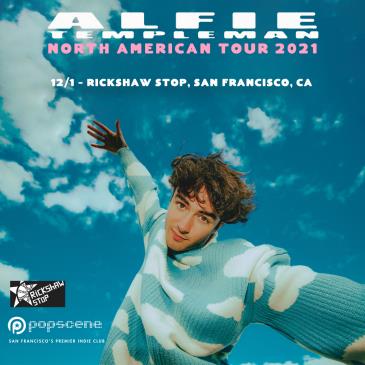