Axtone Records is the label of Swedish DJ/Producer Axwell. The label started life in 2005 as an imprint to release Axwell's own material and in recent years has expanded into a label that is actively signing and releasing quality house music from all around the globe.

Since 2011, sonic shape-shifter Deniz Koyu has been tearing up the club floors with his masterful take on dance music. An ever-evolving artist, Deniz Koyu is in a class of his own with his perfect production, high-energy shows and innovative sounds. Known as a producer’s producer – who counts Axwell & Ingosso, Alesso, the late Avicii, David Guetta and Nicky Romero among his biggest fans – Deniz is the genius behind hits ‘Tung’, ‘Hertz’, ‘Bong’, ‘Follow You’ and has released remixes for the likes of The Chainsmokers, Zedd, Miike Snow and David Guetta.

A musical pioneer and champion of his own #FutureJack sound, British DJ and producer D.O.D (Dan O’Donnell) continues to blitz all before him, on account of his productions and uniquely skilled craftsmanship behind the decks. The first quarter of 2019 has seen Dan return to the box at Ministry of Sound, release his long awaited single ‘According To Me’ through Axtone plus join a rare breed of DJs who have appeared multiple times on Pioneer DJ sounds including the likes of Carl Cox, Roger Sanchez, Sneak, Laidback Luke, Hot Since 82 and KiNK. 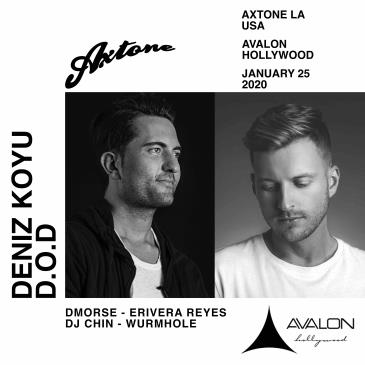