Awaiting the release of their 5th all original album, Alex Lucero & The Live Again Band have been pounding the pavement playing live shows and spreading their original material. Their music has been described by people in the industry as “Soul Americana” and can be heard on radio stations such as KPIG 107.5, KSQD 90.7, KSCO 1080 and more.

Anthony Arya is a singer, guitarist, and songwriter from Santa Cruz, California. In Fall 2018, at age 15, Anthony was on Season 15 of NBC’s The Voice. Shortly after he released his debut album Going To California. In music-rich Santa Cruz, California, Anthony is a crowd favorite, voted by the community as Under 18 Person of the Year in 2019. Arya’s music, folk rock with blues and jazz influences, is frequently played on roots station KPIG. Arya has performed hundreds of shows around the Bay Area and folks say you're likely to walk away humming one of his tunes for days after a performance. Fans love the upbeat rock songs mixed with melodic lyric tunes on the second album, The Road, which was released in May 2020. 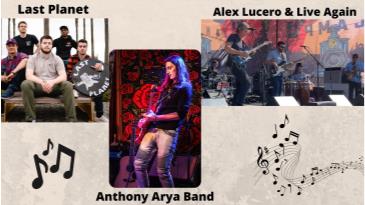