Come as your favorite VILLAIN and wreak havoc to the sounds of...

Ultimate Fantastic is an unparalleled combination of intelligent lyricism and spine melting R&B vocals upon a foundation of meticulously produced original bass music. Initially joining forces for a Burning Man project, this team of West Coast musicians quickly won the affection of any audience who caught their show, which features an infectious array of supreme talent, friendship, humor and creative prowess on stage. Ultimate Fantastic is comprised of Julian Fritz (Dropical) on production, Deja Solis on seductive, soulful and intriguing vocals, and Pharroh and Wink delivering intricately laced word-play and emcee vocal precision. All four members are seasoned artists who have toured extensively world wide and been involved with a versatile line-up of influential musical groups including Hamsa Lila, Vagabundos, Pega5u5, to name a few. Steeped in the West Coast, the group draws from a variety of influences including underground hip-hop, festival sub- cultures, electronic dance music and roots and soul tradition; and synthesizes their original artistry into ardent and unbridled musical expression and storytelling. Their sound is at once tasteful and classic as it is futuristic and imaginative. Their debut album “Super Human,” released by Jumpsuit Records, is sure to win your heart and delight your senses with its adventurous, refreshing, and refined musical spirit. Look for the album release January 27th 2017.

The Fungineers are a super group of musical magical weirdoes that make Life more Fun by creating fantastically colorful music, videos, live shows, clothing, toys and more. They bring all their flavors out to shine in their unusual live performance, a fresh mix of original tracks, live looping beatboxing, interactive improv, freestyle songs, crazy visuals, costumed choreography, delivered by an explosive cast of crazy characters. It’s a full sensory adventure that is silly, sexy and surreal.

The Fungineers are led by Paragon the CyberUnicornTron (part robot-monkey, part unicorn, beatboxing DJ), along with MC’s Lil Dino, Doctah AquaSocktaPuss, Flavatar, plus an always-expanding cast of Fun friends and guests galore managed by the esteemed Janitor-Manager, Kyrian Gineerian. The synergy of this playful posse offer up an innovative invitation into fresh realms of play and possibility through music, dance and more... It’s a kids show for adults, an adult show kids love, a teenage dream come true, and a grandparent’s weird and wonderful Saturday night.

Based in their secret hideout, the Funderground Station, located somewhere in the Pacific Northwest of the planet, the Fungineers are on an eternal quest to engineer brand new kinds of Fun that tickle all the senses and inspire bold and beautiful behavior. They’re on a mission of self-exploration through artistic expression, and aspire to inspire a new sense of freedom, encouraging everyone to live a more colorful jubilant existence. In essence, the Fungineers make Life more Fun!

Mr. Rogers first emerged in the San Francisco underground in 2006, and caught the attention of many with his sets of 100% original boutique beats. His unique syle has bounced crowds at numerous major music festivals world-wide, including headlining slots at Rainbow Serpent and Earth Frequency in Australia, Satya and Lau Lau in Israel, Lost Theory in Croatia, Envision Festival in Costa Rica, Shambhala, Entheos, and Astral Harvest in Canada, as well as all over the U.S. including peak slots at countless West Coast Festivals.

Mr. Rogers continues to tour the world after the success of multiple releases on his own label, Ooze System Recordings, and his 2015 breakout side project, PEGA5U5.

From a familiar perch atop the bass tombs, ethereal empress deLphi is long-celebrated for detonating the dancefloor with an amalgam of progressive bass music, global riddims, classic hip-hop, mash-ups and timeless 90's R&B. From humble beginnings as a spoken word poet and renegade artist, to successful runs with Goddess Alchemy Project and her own Radio Tarot, deLphi has leveled up in style and substance, piloting soul seekers on an introspective dancefloor journey. She has a gift for merging cultures in sound, the music dripping with sexy on any occasion she takes to the decks. Fifteen years deep in the West Coast game, deLphi remains magik maker and mystic; no stranger to spiritualized shanti nor the trillest dancehalls. Like a phoenix rising, she brewed up a temporal storm on her new mix Love Notes; a mystical maiden is reborn with a clarity in focus. Ever the purveyor and tastemaker, the DJ refreshingly blends psychedelic bass textures with sublime femininity and an urban aesthetic. Delphi is the rare classicist able to weave yesterday's tomorrow into a textured afghan distinctly her own.

15 years from vinyl to digital... whether it's dusty electro swing or mashed up ghetto funk... expect a mid tempo glitchy bass, a dash of house and pinch of good times.

+ SILENT DISCO in the garden w/ BLUEPRINTS and JUKE JOINT 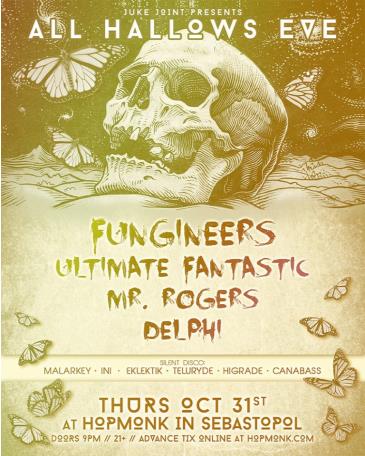 Silent disco in the garden