Combine the iconic AVALON Hollywood and a constantly evolving roster of boundary-pushing electronic acts and you've got the recipe for CONTROL LA. Born in 2008, the weekly phenomenon stands as the longest running nightlife party in the states and maintains its ground-breaking music programming by showcasing the strongest up-and-comers with festival headliner potential. Previous years have seen the likes of an early Skrillex, along with acts like young Zedd, Wolfgang Gartner, Porter Robinson and a pre-"Turn Down For What" DJ Snake all having graced the CONTROL stage, it's safe to say the Friday event is the premiere stop for DJ prodigies. CONTROL has sounds for everyone, diversifying its lineup with an array of hip-hop artists including Mystikal, Zaytoven, and DJ Premier. Each CONTROL LA lineup is invariably ahead of the curve and adds to the over 4,000 bands and DJs who have already performed at the renowned event.

AVALON Hollywood is happy to announce that  Angelz, Bijou, and Ciszak with special guests KRZA and Schade, will be performing at CONTROL on November 17th.

Angelz began making hip-hop and techno remixes as a 15-year-old high school student. Combining the “rawness of hip-hop with the repetition of house beats”, his innovative sounds continue to drive audiences to dance floors across the world.

Bijou hails from Pheonix, Arizona, and cemented himself as a local legend by playing hundreds of shows a year. His reputation quickly became well known throughout the country, and began playing shows from New York to Las Vegas. His viral hit “Hello” with Dr. Fresch has been supported by DJs like AC Slater, Destructo, and Malaa, and he quickly became one of the most sought after DJs in the house scene.

Make sure to check out Bijou’s new single being released on September 26th.

Dirtybird DJ Ciszak has been a legend since he arrived on the West Coast. This Brazilian DJ has produced a number of mega-hits like ‘Hypnose’ and ‘I Want’. His success is exemplified by his growing international following, and his consistent chart-topping singles show he’s not slowing down anytime soon.

KRZA made her main stage debut at CONTROL in 2016, and we’re excited to welcome her back to the stage. Shade has also graced the CONTROL stage and is sure to rock the house once again.

You won’t want to miss this talent-packed lineup on 11/17 at AVALON Hollywood.

PIONEER STAGE PRESENTED BY UP ALL NGHT (abc order): 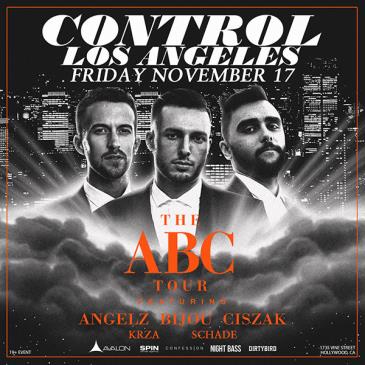