What do you get when you surround the Grammy Award-winning rhythm section from one of America’s most beloved rock bands with the top touring talent in the music business? The world’s greatest cover band—American Salvage—that’s what.​
American Salvage isn’t any cover band. Think of the last time you were at a wedding or bar, and winced through the band butchering “Drops of Jupiter (Tell Me).” Now picture a cover band that features two of the golden-gramophone-winning hit’s actual songwriters. Yep, that’s American Salvage.​
The newly minted quartet features drummer Scott Underwood and bassist Charlie Colin, co-founding members of pop rock band Train, plus über-talented vocalist Danny Beissel, who has shared the stage with a menagerie of rock legends, including members of the Doobie Brothers, Boston, Steely Dan, and the Godfather of Soul himself, James Brown.​
With an ever-evolving repertoire, American Salvage performs only the choicest cuts from the ’70s, ’80s, and beyond. You’ll hear classic rock radio staples such as U2’s “New Year’s Day,” The Clash’s “Rock the Casbah,” The Car’s “Let’s Go,” and The Cult’s “She Sells Sanctuary.” You’ll sing along to medleys, like Crosby, Stills & Nash’s “Southern Cross” into “Helplessly Hoping” into “Love the One You’re With”; or A-ha’s “Take On Me” into Harry Styles’ “As It Was” followed by Bruce Springsteen’s “I’m On Fire” (trust them, it works). And, of course, you’ll get two-fifths of Train’s original lineup doing some of the band’s most karaoked numbers, “Meet Virginia,” “Drops of Jupiter,” and “Calling All Angels.”
https://www.instagram.com/americansalvageband/ 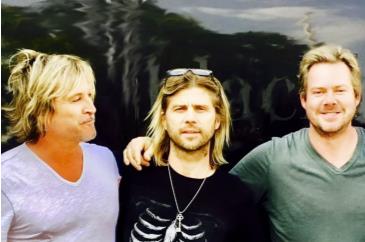