The tenth solo effort from Amy Ray, If It All Goes South is an album born from deep devotion to creating music that strengthens the soul. Over the course of 10 gracefully crafted and galvanizing tracks, the Georgia-bred musician reflects on our collective history and shares her vision for a better future, threading every song with both intensely personal storytelling and clear-eyed observation. Recorded live to tape at Nashville’s Sound Emporium and mixed to tape by Tedeschi Trucks Band sound engineer Bobby Tis, the album owes much of its freewheeling vitality to the potent chemistry between Ray and her longtime bandmates (including guitarist Jeff Fielder, a Seattle-based musician known for his work with artists like Mark Lanegan) as well as such esteemed guests as Brandi Carlile, Allison Russell, The Highwomen’s Natalie Hemby, I’m With Her, and more.

In keeping with the spirited eclecticism that’s always defined Ray’s work (the cathartic punk of her 2001 solo debut Stag, the finespun country of 2014’s Goodnight Tender), If It All Goes South encompasses everything from gospel to punkabilly to folk, each handled with equal parts unruly ingenuity and extraordinary precision. Mainly produced by her frequent collaborator Brian Speiser, the album brings that unbridled sound to Ray’s nuanced exploration of matters both emotional (loss, family life, the work of living with joyful intention in endlessly chaotic times) and political (the climate crisis, racial equity, homophobia’s poisonous impact). Rooted in the warmly incisive songwriting Ray has long brought to her role as co-founder of Indigo Girls—the seminal folk duo now in their fifth decade—If It All Goes South ultimately provides the kind of forward-thinking perspective needed to carry on with purpose, hope, and irrepressible joy. 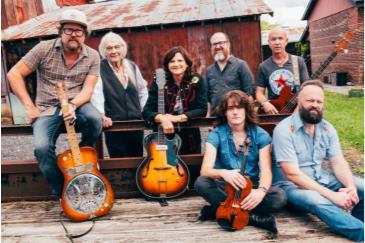