An Evening with Ben Williams:

Williams released his sophomore album, Coming of Age in April 2015, a collection of new works reflecting his wide-ranging musical interests as well as his growth as a musician, improviser and composer. Says Williams, “This new music reflects more of where I am on my journey. I think I have matured as a composer and I am better able to deliver my ideas to my fans and hopefully to a new and expanding audience”.
Williams won his first Grammy Award in 2013 with the Pat Metheny Unity Band for Best Jazz Instrumental Album. In 2013 he recorded with Metheny on Kin; and in 2014 he performed 157 concerts in over 30 cities throughout the world with Metheny, earning his stripes as a true road warrior. He considers his experience with Pat as transformative, saying, “Pat has been a great influence on my writing and arranging. He is one of the greatest composers alive. Seeing him work behind the scenes is unbelievably amazing. He is an incredible genius. I aspire to become the type of leader that he is because he has pushed me beyond what I thought I could do.”

In 2013 & 2015, Williams received the DownBeat Magazine Critics Poll Rising Star Award for Bass. Williams became a “Rising Star” when he won the 2009 Thelonious Monk International Jazz Bass Competition Award that landed him his first record-deal with Concord Records. Thereafter, he recorded and released State of Art in 2011 with his band, Sound Effect. The Album received an impressive 4.5 Star Review in DownBeat Magazine and reached #1 on the charts of iTunes and the National BillBoard. He was named the 2011 iTtunes Breakthrough Artist of the Year in the category of jazz. Among the many awards that he has received, he received the Michigan State University (MSU) Alumni Award for maintaining the highest of standards in his profession and in his personal life as an MSU Alumnus.
Williams’ new album moves affirmatively to assume the mantle of leadership in contemporary music. Williams adds, “I believe each tune should tell a story like a good album to a good movie where there are emotional ups and downs, thematic and character development, and so on. At the end of it all you should feel moved and inspired . . . I truly believe that music is the most powerful force in the universe that we all can connect to.”
At the core of this project Coming of Age are members of his working band Sound Effect with saxophonist Marcus Strickland, guitarist Matt Stevens, pianist/keys Christian Sands, and drummer John Davis.

Adding to his sound effect are percussionist Etienne Charles and synthesist/keyboardist Yuki Hirano. Williams infuses the sound of his band with a sparkle of guest artists – Oakland born R&B/Soul songstress, Goapele, world renowned vibraphonist Stefon Harris, the gifted young trumpeter Christian Scott, and W. Ellington Felton, a Washington, DC based vocalist/emcee/spoken-word artist.
Finally, Williams enriches his palette of arrangements with a string quartet featuring violinists Maria Im and Dima Dimatrova, violist Celia Hatton and cellist Justina Sullivan.
Coming of Age is a project that cannot be pigeonholed musically or confined to a specific audience. Williams claims, “I’m not really good at categorizing music, nor do I feel the need to categorize my music, I leave that up to other people. To me this is just my music and it comes from a lot of different places. I personally like to think my music as Soul Music. If people think of it as Jazz that’s fine so long as they like it. That is all I care about.”
Ben Williams born December 1984 is a native of Washington, DC - was educated in the DC Public School System including Duke Ellington School of the Arts - Received his Bachelor of Arts in Music Education from Michigan State University and a Master of Music in Jazz Studies at Juilliard School Conservatory. 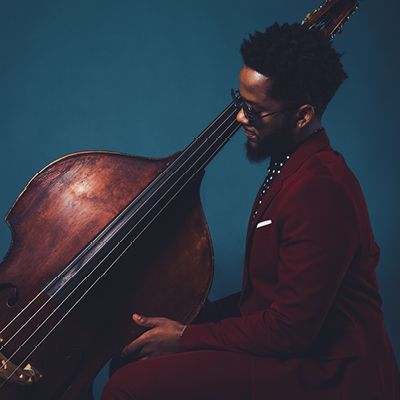