This show has been moved from Grant's Lounge

ANDY JOHNSON AND THE SHADE TREES
Andy Johnson is a writer, singer and guitarist from Upson County, Georgia, known as the songwriter and frontman of middle GA band Royal Johnson from 2014-2019. His folk-rock aesthetic, country charm and soulful blues presence have afforded him opportunities to perform at some of the southeast’s most respected venues, and work under the tutelage of some of southern music’s pioneers, such as Hall of Fame Producer Paul Hornsby and R&B guitar legend Robert Lee Coleman. He also won the Atlanta Blues Challenge in consecutive years (2016-2017) as a member of Dos Blues Guys.
In early 2020 Johnson began to record Help Yourself at Sky South Studio, with the guidance of trusted friend Daniel NeSmith (Back City Woods). The record will prove to be his most focused release so far, leaning more on his folksy roots, but still with the edginess that has made his previous work stand out. A lead single, “500 Pesos to Oz,” was released in July and is available on all streaming platforms. The full album will be available worldwide April 22.
The Shade Trees is NeSmith's new musical avenue, showcasing his diversity and capability in a more acoustic realm than before.

PBDs
The Pine Box Dwellers are an American rock band from Waycross, GA. Sean Clark (vocals and guitar) and Ingram Connor Griffin (vocals and percussion) draw influence from varied genres. The PBD's experimental approach to swampy roots-rock won them "Band of the Year" at the Georgia Country Music Awards in 2018. 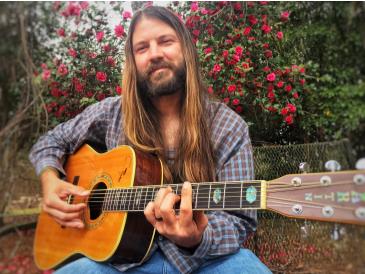