WHAT IS THE ANN ARBOR BLUES FESTIVAL?

North America’s first electric blues festival was held in Ann Arbor, Michiganin August 1969. That’s when a small group of University of Michigan students,influenced by the ‘60s counterculture, defied racial prejudice and introduced20,000 mostly white teenagers to a cadre of black blues musicians – many ofwhose songs were only known to mainstream Americans because they had beenre-released by white rock and roll bands like Cream, Derek & The Dominos,Creedence Clearwater Revival, Eric Burdon and the Animals, and the RollingStones.

The lineup in 1970 was equally star-studded, with artists like Buddy Guy, OtisRush, Rick Derringer, and Johnny Winter cementing Ann Arbor’s reputation as thepremier blues festival in the country. By 1972, famed concert promoter PeterAndrews and political activist John Sinclair teamed up to lead the festival,which they rechristened as the Ann Arbor Blues and Jazz Festival.


OUR PLEDGE TO YOU

A half-century later, society is again at a crossroads. We face many of thesame social, cultural, and political challenges that existed in 1969: we havebecome more polarized, more divided. The 50th anniversary of the festival thatchanged everything is the perfect occasion to reaffirm the spirit of unity andequity that the Ann Arbor Blues Festival ushered in.

A Word about the Charities We Support

Did you know that $2 from every ticket purchased goes to support charitable organizations?

Because we’ve all received so much out of music, the Ann Arbor Blues Festival proudly supports the Sweet Relief Musicians Fund, which provides financial assistance to all types of career musicians who are struggling to make ends meet while facing illness, disability, or age-related problems. We’ll be donating $1 from every ticket sold to this worthy non-profit organization.

We’re also committed to finding a cure for one of the most prevalent forms of muscular dystrophy there is – Facioscapulohumeral Muscular Dystrophy (or FSHD). As the world’s largest research-focused patient advocacy organization for FSHD, the FSH Society is accelerating the development of treatments and a cure for the nearly one million people worldwide who are affected by this muscle-wasting disease. We’ll be donating $1 from every ticket sold to the FSH Society.

If you’d like to add your own contribution to these organizations, please make your selection above.

With a special performance by the Ann Arbor Music Center All-Star youth band beginning at 5:50 pm

The Ann Arbor Blues Festival is an outdoor event and will go on "rain or shine" unless there are severe weather warnings and/or the threat of lightning in the area. 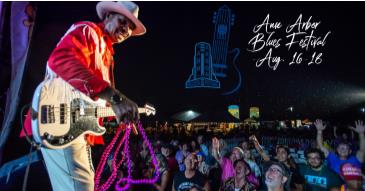