Anthology - A Tribute to The Allman Brothers Band

Anthology pays tribute to the Allman Brothers Band in the highest fashion, bringing with them some honest pedigrees to this legendary music.

This band began in 2017 out of a coffee shop meeting between Dave Kalz, who was the founding lead guitarist for Devon Allman’s Honeytribe, Danny Liston, who toured as a member of the Gregg Allman Band in the late 1970’s, and Dickie Steltenpohl, who had also toured with Gregg in the late ’70’s.

Within weeks, Kalz had pulled in his old buddy, Mike Zito - from Royal Southern Brotherhood, who also brought Yonrico Scott (drummer for Derek Trucks Band and Royal Southern Brotherhood) into the fold.  Danny and Dickie reached out to former Mama’s Pride keyboardist, Tom Denman and drummer James Jackson (who had played with the likes of the George Benson and Level 42), and a lineup was formed!

The band debuted at Delmar Hall - St. Louis in Jan of 2018 with a 2 hour plus electrifying show of classic Allman Brothers music.  The show was over-sold out and the theater was still turning people away at the door.   From there, the band went on to doing shows in Texas, including a packed house at Houston’s Dosey Doe, and a double bill with the one and only guitarist for Neil Young’s Crazy Horse and Ringo Starr’s All-Star Band, Nils Lofgren, at the Jefferson Theater in Beaumont, TX.

Immediately after the bands third successful return to St. Louis, in Sep of 2019, tragedy struck when Mike Zito received the phone call just 6 days after their show, that Yonrico had passed away.  The band, in shock, went dormant.  Then Covid hit an unprepared nation and the music industry was devestated.

Finally, in the fall of 2020 the band returned, with a re-shuffled lineup, intent to light the audience on fire with their return to St. Louis, for a sold out show at The Pageant.  And light it up they did, with a hard hitting show, above and beyond audience expectations….. only for covid to re-emerge and another 6 months of dormancy.

Anthology re-emerged in May of 2021 with another successful appearance at the Pageant, followed by two sold out shows at the Wildey Theater, in Edwardsville, IL.   By the time the band hit Edwardsville, they had risen to new heights, playing two burning sets each night that had audiences on their feet from the very start of the show.

Anthology has been at it non stop since then, and audiences cannot seem to get enough of this show.  A real treat for fans of the Allman Brothers that you won’t want to miss!

Current lineup for the band:

Mark Kersten (formerly of Butch Wax and the Hollywoods): Percussion

*Full food and drink menu is available from the PIAZZA

***Please note that all tables for this show will be sold an entire table with tickets for all seats at that table. I.e. You can only purchase tables of 4 as a whole and must purchase al tickets and seats at that particular table.

*Please note that reserved seats/ tables do not guarantee a server.

COVID OPERATING POLICY:Following state and local officials' recommendations we suggest that anyone not vaccinated wear a mask while attending events at the PIAZZA. If you don't feel or safe or know what to do please contact your physician and come up with a solution that works for you. 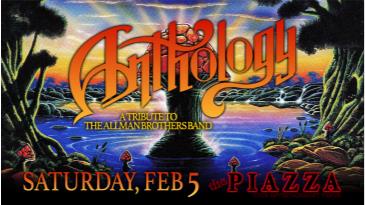