With a guitar slung over his shoulder and the amps turned up full tilt, Anthony Gomes electrifies blues and rock at a 21st century crossroads of his own. The Canadian vocalist, guitarist, songwriter and producer wails with all the force of a hurricane in the Mississippi Delta and enough fret-burning fireworks to leave his strings in flames. Over the years, he’s toppled the Billboard Blues Chart at #1, earned the endorsement of legends such as B.B. King, tallied tens of millions of streams, and packed shows on multiple continents. In 2022, he makes his Rat Pak Records debut with High Voltage Blues, amplifying his soul and spirit like never before.
“I’ve learned how to embrace my voice as a guitarist and as a singer,” he states. “I understand who I am, and I use my strengths to my advantage. I have a blues soul and a rock ‘n’ roll heart. I love to jump back and forth between both with a modern day approach. When I play rock, it’s got a little more dust to it. I just try to be the best me I can be. So, I’m the best Anthony Gomes impersonator out there,” he grins.
Born and raised in Toronto, Ontario, he fell in love with music as a kid, listening to everyone from Muddy Waters and Jimi Hendrix to Jeff Beck and Eddie Van Halen. At 14 years old, Anthony gravitated to the guitar and his relationship with the instrument was born. After grinding it out, his chops caught the attention of B.B. King’s bus driver at a jam night. Blown away, the driver introduced him to B.B. who invited him to open up a string of tour dates in 2005. Gaining invaluable knowledge from “The King,” he went on to share the stage with the likes of Buddy Guy, Robert Plant, Joe Bonamassa, Heart, Sammy Hagar, Kenny Wayne Shepherd, and more. Along the way, his concert attendees have included Academy® Award winner Morgan Freeman, John Goodman, and Vince Vaughn as well as Eric Clapton, to name a few.
2018’s Peace, Love &amp; Loud Guitars vaulted to #1 on the iTunes Top Blues Albums Chart and #1 on Amazon Music’s New Release Blues Chart. Meanwhile, Guitar World readers voted him one of “The 30 Best Blues Guitarists in the World Today” in 2019,  and the publication noted, “Gomes is another power player who is at his best when his gear is in the scorched earth between blues and rock.” After seven consecutive Top 10 debuts on the Billboard Blues Albums Chart, Containment Blues marked his second #1 on the respective chart in 2020.
During 2021, he signed to Rat Pak Records and assembled High Voltage Blues, re-recording fan favorites from previous releases and cutting three new tunes. On five tracks, Ray Luzier of Korn and Billy Sheehan [Mr. Big, David Lee Roth, The Winery Dogs] handled drums and bass, respectively. Co-produced by Anthony and Peter Carson, sessions went down in St. Louis and Nashville
“We had a lot of fun rocking these songs up,” he observes. “As an artist, it was great to circle back to some of my past work and look at it from a different perspective. Billy and Ray really pushed the way I play guitar, and they added a whole new element with a little insanity. When people ask me what I sound like, I say, ‘If B.B.
King was in AC/DC, that’s what it would be’. That’s High Voltage Blues in a nutshell.”
In the end, Anthony Gomes is just the kind of guitar hero we need for today.
“I’m either the last of a dying breed or the start of a new revolution,” he smiles. “I still believe in a world of guitar heroes. I strive for a world where you don’t have to be 19 years old to sell a lot of records and tickets and to make a statement. I’m one of those people who doesn’t think rock, or the blues is dead. I’m looking for fresh ways to bring them together. I’m at the table rolling the dice all in the name of blues and rock ‘n’ roll. I know there’s never been a more exciting time for music, and I’m here for the journey.” 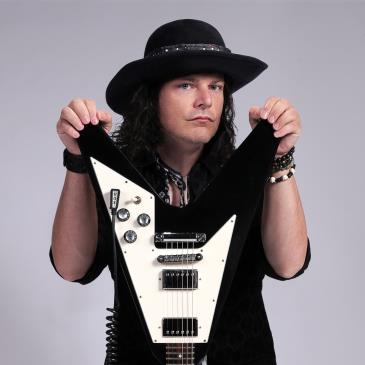