Gear up for an incredible lineup this Friday, the 18th of August, as CONTROL at Avalon presents a night anyone would have to be crazy to miss. With Antiserum, Diskord, Swage and a very special guest appearance from Dack Janiels, this show will surely be the best way to end your workweek.

First up is San Francisco based producer, Mikey Schumer, otherwise known by his stage name, Antiserum. Antiserum’s hard hitting bass music makes him a staple DJ for anyone and everyone who enjoys heavy drums and catchy melodies. Due to his unique style and incredible talent, Antiserum has been signed to some of electronica's finest labels including, OWSLA, SMOG, Firepower and Never Say Die. Because of his exceptional skills, it’s no surprise that he has also been supported by countless leading names in the industry including Skrillex, Diplo, Bassnectar and RL Grime. Forever pushing bass music boundaries, Antiserum is truly a one-of-a-kind act you won’t want to miss.

Next, coming in hot is U.K. based DJing duo, Ed and James, that go by the moniker, Diskord. Before meeting, the two had both played solo shows and festivals all across Europe, Australia and New Zealand. Although the duo have only been producing music together for a year and a half, they have already gained a sizeable fanbase and the ears of some of the greatest electronic artists out there including Krewella, Adventure Club and SKisM who signed them to his record label, Never Say Die, where they released their first record. Diskord’s high energy melodies mixed with catchy hooks and rolling basslines, will leave every CONTROL goer feeling hyped and ready for the weekend.

Last but certainly not least, CONTROL presents Greg "GT" Sills aka Swage. The Los Angeles local has been playing music since he was eight years old and there is no sign of him stopping now or anytime soon. Partnered with YourEDM, Swage founded and co-owned his own label, Techibeats, which has undoubtedly proved his knowledge and passion for electronic music. With incredible drum and bass sounds and productions to match, Swage has proved himself to be a key player in electronic music with much more to come. His rhythmically precise drums beats splattered with distinct fills and grooves, makes any listener want to dance until daylight.

Hailing all the way from Northern California comes special guest, Dack Janiels otherwise known as, Tanner Chung. Graduating from Icon Collective, a premier music school in Los Angeles, Dack Janiels set out to produce his own music catching the eye of some of the most influential names in the business including Modestep, Excision and NGTMRE. Loaded with his new EP released just a few months ago, Dack Janiels is ready to fire his new tracks for all the people of Los Angeles to hear.

Once again, CONTROL is proud to present an unparalleled lineup consisting of music from Antiserum, Diskord, Swage and special guest, Dack Janiels to grace Avalon this August 18 with music for you and your friends to dance endlessly to. 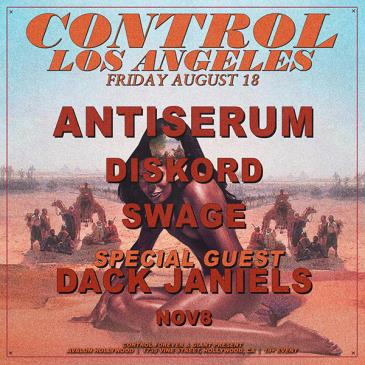