SHARE THIS EVENT TO ALL OF YOUR FRIENDS PLEASE

Prince’s Last Bassist
In his own words....."I remember Prince saying to me, I saw you before I heard you.” I first got to Paisley Park early 2015 – got an email asking, ‘Are you available to come to Paisley to Jam?’ And of course I said YEP! I became his bassist for a new band he was forming with Kirk Johnson on drums, Adrian Crutchfield on saxophone and Donna Grantis on guitar. We played various shows at Paisley with Prince. During that time (late 2015/early 2016) I started recording with him. We recorded an album-The only song that was put out from the project was “Ruff Enuff”, which was released January 2016 on TIDAL under the moniker “MONO NEON” (Prince asked to use my name only for the TIDAL release).”

JOHN MEDESKI
John Medeski is an American jazz keyboards player and composer. Medeski is a founding veteran of New York's 1990s avant-garde jazz scene and is known popularly as a member of Medeski Martin & Wood.

DARU JONES
Born in Michigan to two professional musicians, he began playing the drums at the age of four. Jones has been influenced by musicians from a wide range of genres. These eclectic musical tastes have carried over into his own career as he has recorded, performed, and toured with renowned artists and producers such as: Jack White, Nas, Talib Kweli, Black Milk, Salaam Remi, Lorenzo Jovanotti, Sturgil Simpson, Kim Burrell, Rance Allen, Esparanza Spalding, Black Violin, Ski Beatz & The Sensei’s, and Jon B.

ROBERT WALTER
Robert Walter performs all his own stunts. For 20 years, the San Diego native has been pulling drawbars and pushing the limits of the Hammond B3 organ. Walter helped form the the Greyboy Allstars in 1993 with Karl Denson, Elgin Park, Chris Stillwell, Zak Najor, and DJ Greyboy. Influenced by soul-jazz and funk records from the 1960s and 70s, the band juxtaposed jazz improvisation and dance music. They continue to record and perform to a committed fan base. The Greyboy Allstars also served as the band for Robert’s first solo record, Spirit of ’70 which also featured saxophonist and Miles Davis sideman Gary Bartz.

DJ LOGIC
DJ Logic is a turntablist active primarily in nu-jazz/acid jazz and with jam bands. Kibler was born and raised in The Bronx. An early interest in hip hop led to his using the turntables, practicing often. He has performed as a guest of Ratdog, Medeski Martin & Wood.

~ Join us on Thursday Night for this premier video broadcast ~ 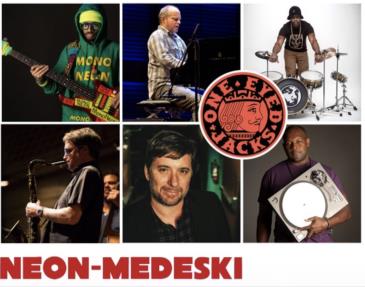