Processing...
Tickets
Tickets are available at the show!

Tickets are available at the show.

Since their earliest days in 1987, the Blue Dogs have beenblending the genres they grew up with - bluegrass, country, rock & soul,“turning bluegrass on its ear by creating what’s now referred to as ‘Americana’or ‘alternative country’ before those terms were commonplace” [CharlotteObserver]. More than 30 years later, the Blue Dogs continue to play 50-100shows a year. Fans that have been with them since the beginning stay close tothe pack for the unpredictability of their live shows. Known for breaking thefourth wall and interacting with their audience, the Blue Dogs shine when theenvironment allows for spontaneity. Lead singer Bobby Houck and upright bassistHank Futch founded the band while attending Davidson College. When bothrelocated back to the Carolinas in 1990, they were joined by another SC native,Phillip Lammonds. His and Houck’s songwriting partnership contributedsignificantly to the Blue Dogs’ three major studio recordings, Blue Dogs (1997), Letters from Round O (1999), & Halos and Good Buys (2004). The Blue Dogs have spent two decades ofsongwriting and sharing the stage with artists like Willie Nelson, Hootie &the Blowfish, Cracker, Bruce Hornsby, and Widespread Panic. Bobby and Hank,along with Dan Hood (guitar), Parker Dewitt (drums), and Charlie Thompson(pedal steel) make up the band, often joined by James Bernabe (mandolin), JamieHarper (fiddle), and Travis Allison (keyboard). They continue to perform allalong the East Coast on a regular basis. 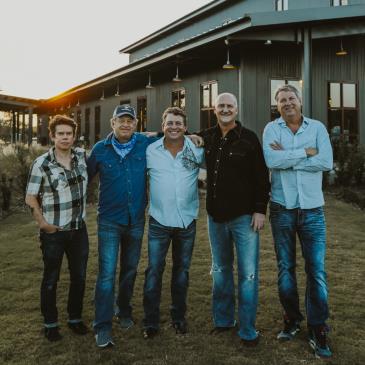