Headlining the evening is the world-renowned DJ and producer Brian Transeau, better known as BT. This Los Angeles-based trance pioneer first rose to prominence in the mid-90s, shaping the landscape of dance music in Europe. His remix of Tori Amos’s “Blue Skies” took over the British and American club scenes and made his dream house style a staple of mid-90s club music. Since then, BT has reshaped his creative approach through production work for Britney Spears and film scores for movies like Monster and The Binary Universe - a departure from this club bangers.

In 2011, BT’s These Hopeful Machines earned him a Grammy nomination for “Best Electronic/Dance Album,” demonstrating his versatile career in the dance music community. With symphonic, more ambient work in Electronic Opus (2015) and -+ (2017), BT has time and time again showcased his multi-dimensional body of work as both a DJ and producer.

Accompanying BT is DJ and vocalist Amanda Darling, whose multi-genre and neo-classical music has earned her notoriety across the globe. 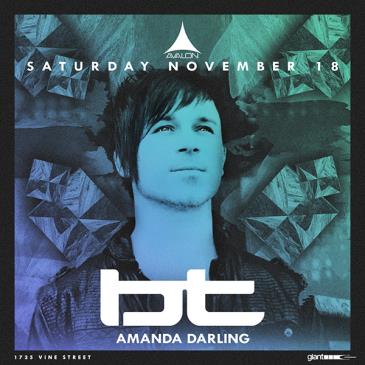