On Saturday May 18th, AVALON Hollywood will proudly host Grammy nominated composer and technologist, BT, for a truly unforgettable experience.

Commonly referred to as the Godfather of trance, BT is a cutting-edge artist and producer for a multitude of musical styles including electronic, film composition, bass, and even classical. Throughout his sonic trek, he has never compromised his unique vision, and has been a devoted pioneer to electronic innovation. BT has pushed the limits to create music with technology, and is a master of building layers of sounds to create euphoric beats and transcendental qualities to his music.

Some of his commendable achievements include his song “Somnambulist” being impressively entered into the Guinness Book of World Records for the largest number of vocal edits in a song in 2003, along with a nomination for a Grammy Award for Best Electronic/Dance Album back in 2010. BT has travelled the world, performing in Ibiza, Australia, Taiwan, South Korea, and all across America to name a few. For each performance he creates a set to distinctly match the venue’s vibe, and builds his music to an extraordinary apex that fluidly releases into an unbeatable electronic breakdown.

BT will also be joined by a roster of local supporting talent. With sets filled with progressive trance and melodic bass, Antonio Venegas and Aressa will be sure to raise the heart-beats of everyone in the crowd. Complementing these dynamic artists will be none other than LA’s Armen Ayge and Sabogal, with highly anticipated build ups and even better bass drops. 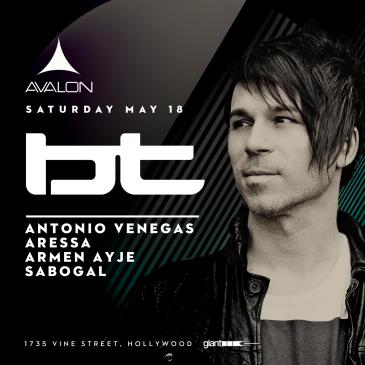