Beauty blooms from discomfort. The second we squirm at the utterance of a lyric or theecho of a guitar chord is the moment we learn about our limits and, perhaps, make achange in our lives. Badflower aren’t afraid of making anybody uncomfortable. TheGOLD-certified Los Angeles-bred and Nashville-based quartet—Josh Katz [lead singer,guitarist], Joey Morrow [lead guitar, backing vocals], Alex Espiritu [bass], and AnthonySonetti [drums]—siphon stress, sleeplessness, sex, sadness, mania, pain, and truth intorevelatory alternative anthems. Katz’s quivering confessions seep into climactic distortionand, like any good rush, you need more.

They deliver this rush on their 2021 second full-length offering, This Is How The WorldEnds (Big Machine/John Varvatos Records).

“It’s hopefully more than just brutal honesty,” muses Katz. “To me, it’s sassy,uncomfortable, funny, clever, and sad. It wasn’t a casual process. It’s all in, so I’m all in.I don’t stop. I don’t quit. I cry a lot. I neglect everything else. There was no reason to setan alarm and wake up in the morning. There was no reason to do anything but make thebest album possible. That’s what we did.”

Badflower continue to commit body, blood, mind, and soul to their art. They’ve certainlygrinded to get to this point. After forming in Los Angeles during 2014, they dropped twoEPs before sending shockwaves throughout rock with their 2019 full-length debut, OK,I’M SICK. LoudWire hailed it among the “50 Best Rock Albums of 2019,” while the singles“The Jester,” “Heroin,” and “Ghost” vaulted to No. 1 at Rock Radio. Not to mention, thelatter picked up a GOLD-certification from the RIAA and win as iHeartRadio Music AwardsRock Song of the Year. Along the way, they garnered further acclaim from Nylon,Alternative Press, Music Connection, and Substream Magazine and performed on TheLate Late Show with James Corden as well as Last Call with Carson Daly. They’re therare act who can ignite a crowd at Kaboo Del Mar or Sonic Temple in addition to sharingbills with the likes of Cage the Elephant, Ghost, Nothing More, Shinedown, Soundgarden,and many more. Thus far, they’ve also gathered over 100 million streams and counting.Meanwhile, one-off singles “30” and “F*ck The World” reached Top 5 and Top 10 at RockRadio, respectively. Before the Global Pandemic swallowed 2020 whole, Josh and Co.had begun penning ideas for what would eventually become This Is How The World Ends.

As shit got real in Los Angeles, the band and their “extended family” of crew and friendspicked up and moved to Nashville.

“We’d wanted to rescue animals and live on a farm forever,” admits Josh. “Once we gotsettled, I built a little studio in a barn where I sleep and we finished the record.”

The best kind of obsession catalyzed the process. When it came to production, the bandtook the reins, preserving an intense unpredictability. At the same time, Josh would watchand rewatch fan-captured live performances on YouTube in order to draw inspiration forrecording.

“It was actually just because I’m a narcissist,” he grins. “We worked so hard to make itfeel spontaneous, raw, real, and natural though. The drum takes are exactly what Anthonydid in the moment. There was no demoing. We set everything up properly and pressed‘record’. If it was good, it was good. Some of the vocal takes are first takes. We had noclock. It’s the most human thing we’ve ever done.”

Speaking of human, the first single “Family” hovers over an ominous drum beat as Josh’svoice barely breaks a whisper. Clean guitar glows through the bass line as he confesses,“affection makes me nauseous, believe me, I don’t want this,” before an exhale ofdistorted catharsis, “Cuz I let you down, and I lost my fucking mind...What happened tothis family?”

“Some people have a perfect white picket fence; I certainly didn’t,” he reveals. “I havefamily issues that linger. Throughout my twenties, I placed so much blame on that. Iallowed myself to validate slowly dipping out of everyone’s lives and not talking to mysisters or parents. It’s easier to call yourself the victim. I realized it was an excuse to beshitty, and it was my problem. I have trouble talking to family members, so I wrote thesong.”

Elsewhere, “Don’t Hate Me” hinges on a push-and-pull between palm-muted guitar and achantable chorus. It culminates on a breakdown where his inner dialogue screams outbefore final strains of piano taper off.

“It’s a lot of self-awareness,” he goes on. “On the bridge, there’s a meta dialogue where Iexplain how I’ve changed my entire life and my appearance.”

The album teeters between searing nostalgic introspection on the acoustic intro“Adolescent Love” and the clarion call of “Machine Gun” where the title resounds, “Thisis how the world ends.” The ride comes to an end on the sardonically elegiac “MyFuneral.” Soft strumming brushes up against visceral admissions such as “Imagine if Itook my life, gave up on love, and died tonight?”, coated in a softly blissful delivery.

“It’s not as simple as saying, ‘I’m sad and want to die’,” he states. “It doesn’t paint me inthe perfect light a lot of artists want to be painted in—or truly beaten down by the worldand just trying to be the best version of themselves. I’m admitting I’m not trying to be thebest version of myself. I don’t even know what that looks like. I don’t know how to changeit. All I know is how to write about it. Now, we have this album.”

In the end, Badflower’s honesty burns in the best way.

“This band means everything to me,” he leaves off. “I’m so obsessive because the musicis going to outlive me. I care a lot about what this band could mean for other people. Thelegacy is almost more important to me than my happiness or success. I don’t know why.It’s probably something I should analyze on the next record,” he laughs. 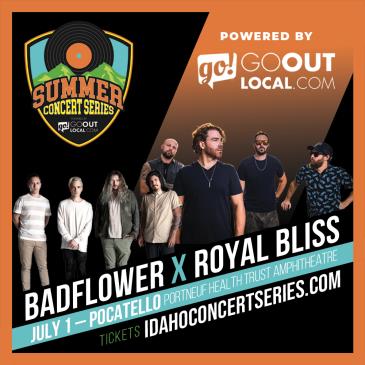