Coming Friday, July, 28, Control at Avalon is proudly presenting four of the world’s finest electronic music artists. Avalon is excited to invite you to come and dance the night away alongside Bare Noize, Far Too Loud, Xilent and Jon Mon.

Bare Noize consists of Oliver Pile and Daniel Brown hailing all the way from London. The iconic duo formed in 2009 and broke through in 2010 with their remix of Medison’s, ‘Harry’, gaining them worldwide recognition and earning them spots on the most popular dubstep playlists. Amassing millions of views on YouTube with their high energy and drum n’ bass music, they attracted the eyes of labels like Atlantic and Polydor Records and collabed on multiple tracks with an up-and-coming artist soon to be known as Skrillex.

Far Too Loud AKA Oil Cash is no stranger to success. With his hard hitting, bass driving, funky techno music, Far Too Loud debuted in 2005 and two short years later, won a Breakspoll Award for ‘Best Single’. Far Too Loud has continuously provided listeners groovy tunes remixing Lily Allen and The Crystal Method tracks in addition to releasing new music under Monstercat, Never Say Die and Skrillex’s label, OWSLA. Far Too Loud is hot off an international tour around Germany, Japan and India and is looking forward to gracing Los Angelites with high energy dancing tunes.

Polish DJ, Eryk Kowalczyk, better known by his stage name, Xilent, is prepared to wow the crowds with his electronic music masterpieces. Xilent’s 2011 single, “Choose Me II" propelled him into uncharted success landing him a #1 spot on Beatport's Dubstep chart, BBC Radio 1’s “Next Hype” track and over 3 million views on YouTube. In 2014, Xilent released his first album under AudioPorn Records generously fusing an eclectic variety of electronic genres. Artists such as Katy Perry, Ellie Goulding and Ed Sheeran are eager for his talents as a remixer and his long time friends and supporters such as Knife Party and Skrillex have premiered his music globally.

Make sure to clear your schedules for Friday evening as this one-of-a-kind lineup consisting of Bare Noize, Far Too Loud, Xilent and Jon Mon on call for support will surely be one you won’t want to miss. 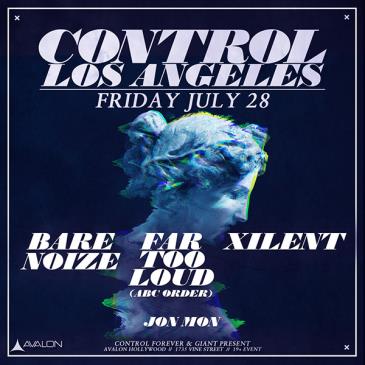