Grab your friends and head over to AVALON in Hollywood for a night full of sultry tunes and cultural enlightenment with Sak Noel and Fight Clvb on October 20th.

International Dance Music Award winner and Latin Grammy nominee Sak Noel is back in the states to deliver fans a sweet taste of his global takeover. As the first-ever Catalan DJ at #1 on the BBC Singles List, he’s known for his chart-topping hits including “Loca People” and “No Boyfriend”, both viewed well over twenty million times on YouTube. Since then, Noel has established his own label Barnaton, releasing a collaboration alongside throwback king Sean Paul called “Trumpets” - an electro-reggae bop to groove on the dancefloor to.

Joining Sak Noel is Fight Clvb, an idiosyncratic trio consisting of SAV, his mysterious hype man Mystereo, and Carly Burns. With a hardstyle foundation fused with reggae and mambo, this dynamic group will be sure to bring extra vibrancy to AVALON’s dancefloor.

Warming up the night will be Dominican Republic’s superstar DJ/Producer Happy Colors who will spice things up with energetic Latin Urban and moombahton beats. Having seen releases on Mad Decent and Main Course, Happy Colors is guaranteed to open fire up the dance floor.

In addition to the night, Los Tioz will be providing some dancey Reggaeton energy. The duo has collaborated with Sak Noel with the hit “Blekete” and solo tracks such as “Dame Lo Que Tengas,” which has seen a release on Deorro’s Panda Funk record label.

Salvi will also provide an opening set in the night. Having collaborated with Sak Noel on “Trumpets” which features reggaeton legend Sean Paul, Salvi has also released a remix for Major Lazer’s hit track “Run Up.”

Also joining Happy Colors from the Dominican Republic is Jenn Morel who is known for adding her own Latin flair to remixes of Cardi B’s “Bodak Yellow” and Migos’ “Bad and Boujee.”

Don’t miss a night of eclectic music and soulful dancing with Sak Noel, Fight Clvb, and a surprise guest at AVALON in Hollywood on October 20th! 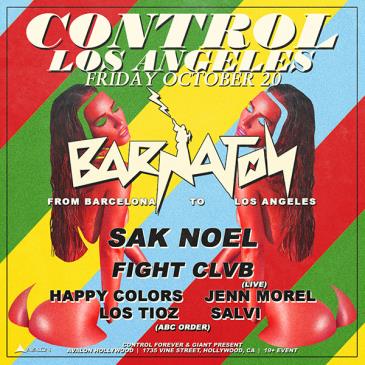