For mercurial L.A. music-maker Will Wiesenfeld, Baths has been a long time coming. The 21-year-old has spent the better part of his days living amidst "pleasant" and "unremarkable" in the suburbs of the San Fernando Valley, so perhaps it's due to a general lack of local inspiration that Wiesenfeld's own work has never fit into a prefab box of its own. Over the last six years, under the handle of [Post-Foetus], Wiesenfeld has gainfully explored the intersections and outer reaches of both electronic and acoustic music. With Baths, his eclecticism finds its greatest focus yet, in a hail of lush melodies, ghostly choirs, playful instrumentation and stuttering beats.

Wiesenfeld's trip began at age 4, when he willed his parents into enrolling him in piano lessons. (The family upright, purchased that same year, sits in his bedroom today.) By 13, he'd begun artisting his own music using Digital Performer and a MIDI keyboard -- a brief, ill-advised foray into Eurobeat that was set right when Wiesenfeld heard Bjork for the first time. Mind blown, he quickly boned up on viola, contrabass, and guitar and took the name [Post-Foetus], stringing together countless live configurations to execute his increasingly inimitable compositions. [Post-Foetus]' fourth album -- a Dntel-ish, song-based melange dubbed The Fabric -- was released on Mu-Nest in January.

Though Baths represents the next evolution in Wiesenfeld's oeuvre -- which also includes the excellent ambient project Geotic -- it came together under nigh-opposite circumstances. Last September, [Post-Foetus] was invited by L.A. electronicist Daedelus to share a bill with a handful of local Beat Music luminaries. Witnessing a burgeoning movement firsthand sparked something in Wiesenfeld that the 'burbs never could. In a fit of inspiration, Baths was born, though not into a preexisting scene. As is to be expected, this music goes its own way: fueled by spontaneity, tempered by Wiesenfeld's background in classic songwriting. Those two influences collide in glorious ways on Cerulean, Baths' stunning debut. 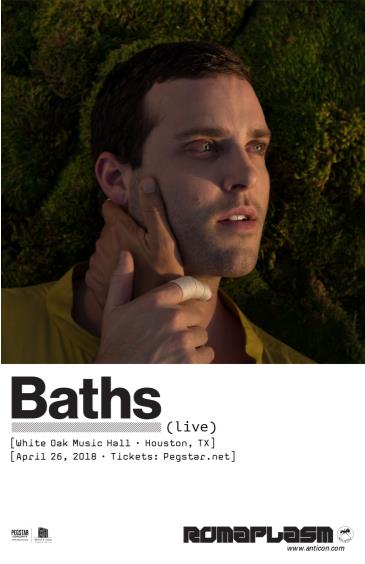