Shlomi Berg, is an Israel based artist that brings psytrance to the club and festival circuit worldwide. He’s released massive tunes on Spin Twist Records and is currently signed with Blue Tunes Records. Berg has produced a large amount of music with four EPs and his full-length album project, “Life Apart” containing his most popular tune, Soul Provider.

Jonathan Allyn is a producer and DJ who is recognized for his talents in techno, trance, and progressive. He’s known as one of the fastest growing US forces in this world and has even been supported in the DJ Mag Top 100 poll as Christopher Lawrence’s “Breakthrough DJ/Producer”. No stranger to AVALON, he’s now making his anticipated return.

Trance Psyberia is made up of three LA natives, Ivan Zhurbin, Stas Mozolevskiy & Alex Fedorov. They host a monthly podcast, Trance Psyberia, that showcases their favorite psytrance tracks as well as another podcast that features other rising star psytrance artists. Check out their Soundcloud link below to get an idea of their closing set after Berg.

AVALON is very excited to have Berg for his long awaited US return. 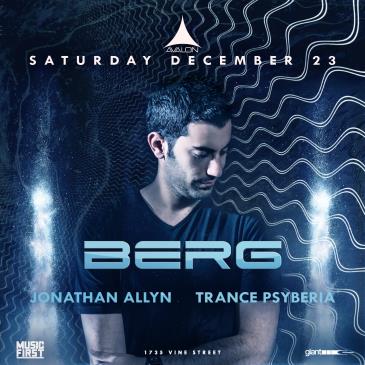