Biscuit Miller,  a showman known for his blazing million-dollar smile and his high-energy shows, plays Chicago Blues with a funk side. Miller won Blues Music Awards for Best Bassist of the Year in 2012 and 2017. He is a born entertainer and is at home on the stage where he connects with his audience through a fun and funky approach to the Blues.

Born and raised on the south side of Chicago, Miller spent ten years as the bass player for the Lonnie Brooks Band, and also played with Mojo Buford and Anthony Gomes.  Since he started his own band, he has gained fame for his understanding of the importance of entertaining the audience, in addition to technical playing ability.

JP Soars is a Blues Music Award winner for the Contemporary Blues Male Artist category in 2013, and was also nominated in 2021. Soars and his band The Red Hots won the 2009 International Blues Challenge in Memphis, TN and claimed the prestigious Albert King Award as best guitarist. He has toured extensively through the United States, Canada, South America and Europe, and released an impressive catalog of powerful music, including being featured on an album with Jimmy Thackery and the Drivers, and released five albums on his own and with the Red Hots. Meeting B.B. King at the age of 19 sent Soars on the path of being a Blues Musician.

Soars, who grew up in Cedarville, Arkansas, currently is making Boca Raton his home,  prides himself with having one of the tightest bands on the scene, with Red Hots bassist Cleveland Frederick and longtime drummer Chris Peet. A gritty and expressive vocalist, Soars elicits signature tones from hollow-body guitars, plus a home-made two-string cigar box guitar for his incendiary slide guitar playing.

“I think that as a musician I am a constant student of the Blues… always trying to learn”, Soars said “It’s never ending... I think that the Blues cuts straight to the soul...It’s a feeling... It can be both happy and sad. My sound I think is rooted in tradition but steps outside the box now and again. I enjoy trying to incorporate all of my influences somehow.”

Inspired by classic and electric Blues, the Gainesville-based Bridget Kelly Band has placed their unique stamp on the Blues genre, with high-energy live performances and a hybrid sound that mixes Texas and Memphis Blues with various southern Blues traditions. The powerful and sultry vocals of singer Bridget Kelly along with the incendiary lead guitar work of Tim Fik forge a signature hybrid sound that combines female urban Blues with riff-driven rockin’ Blues guitar.  The Bridget Kelly Band reached the semi-finals of the International Blues Challenge in both 2015 and 2016.

Known nationally as a DJ on BB King’s Bluesville on SiriusXM Satellite Radio, Early Times is a talented singer and guitarist originally from Sacramento. Blues Blast magazine calls him “a street poet and blues-rocker… stronger than the whisky that shares his name when it comes to fashioning clever lyrics atop a true-blue beat.”

Little Mike & the Tornadoes is well-known for its flawless, high-energy blues sound, modeled after the great Chicago bands of the ‘50s. Little Mike is a mean harmonica player who cut his teeth in New York City in the late 1970s and early 1980s, backing up legendary Bluesmen Pinetop Perkins, Hubert Sumlin, and Jimmy Rogers, and was mentored by Paul Butterfield. Blues Blast magazine called them “old-school Blues delivered the right way by folks who feel it down to the core.” 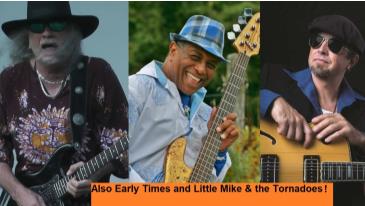