No second album syndrome and no sophomore slump for Britain’s most exciting and challenging young rock band. black midi’sfollow up to Schlagenheimis a dynamic, hellacious, inventive success. Cavalcade, their second studio album for Rough Trade, scales beautiful new heights, reaching ever upwards from an already lofty base of early achievements.

The meaning of the word cavalcade is a procession of people, such as a royal parade, and black midi picture their new album as a line of larger than life figures–from a cult leader fallen on hard times and an ancient corpse found in a diamond mine to legendary cabaret singer Marlene Dietrich –strolling seductively past them. The album art –again, another intricate collage created by David Rudnick–brings this idea colourfully to life, drawing the listener inexorably into this mysterious world, reinforcing the idea that Cavalcade is a glorious collection of stories just waiting to be dived into.

Geordie Greep, the band’s mercurial guitarist and primary singerexplains the fundamentals of Cavalcade: “A big thing on this album is the emphasis on third person stories, and theatrical ones at that.” Cameron Picton, the inventive bassist and occasional singer agrees: “When you’re listening to the album you can almost imagine all the characters form a sort of cavalcade. Each tells their story one by one and as each track ends they overtake you, replaced by the next in line.” Morgan Simpson, the powerhouse drummer advises: “Enjoy it, live with it, spend some time living in it.” When pressed to choose one word to describe the album, Geordie elects for “drama” adding: “The emphasis when we were making and sequencing Cavalcadewas to make music that was as dramatic and as exciting as possible. The flow has the feel of a story, which is rewarding to listen to.”

But the record is dynamic in its musical ambition above all else. black midi listen widely and deeply not just to rock and jazz but to hip hop, electronic dance music, classical, ambient, prog, experimental… And their ethos is simple according to Geordie: “We just combine lessons learned from all of this music to make something that’s very interesting to listen to and something that is brand new.” They are quick to bat away any suggestion that it’s a risky strategy drawing from such a wide source of influences, that the resultant eclectic mix of influences could produce something resembling a mad man’s breakfast. Geordie says simply: “If you worry about that before you start you’re limiting yourself. You have to try because you could either end up with a madman’s breakfast or you could end up with a fantastic kaleidoscope and the only way to find out which one it’s going to be is to try. If you fail, so what? Try again.”

Ground was broken on Cavalcadein those now weird seeming pre-pandemic days of 2019. Songs that had been brewing since the release of Schlagenheimin July began muscling their way onto set lists and finally became individual entities by October, getting refined in between an extensive world tour and a scorching turn at the Mercury Prize ceremony. Early in 2020, the fourth member of black midi from the original line up, guitarist/vocalist Matt Kwasniewski-Kelvin,told the other three that he needed some time away from the group due to problems
with his mental health. They went on to play several live dates as a trio augmented by saxophonist Kaidi Akinnibiand keyboard player Seth Evans. This hook up felt right and the pair feature prominently on Cavalcade. But then, just as they were gearing up to record the album, the pandemic hit, initially throwing everyone into a state of disarray. But to say lockdown forced black midi into a different style of songwriting is to put the cart before the horse.

Speaking about jamming, Geordie said the band had gotten into a rut, that for this record there was a “yearning” to take a different approach, to be more considered, record something that was more harmonically interesting and challenging: “It’s easy to get wrapped up in the improvisation myth of divine intervention, that if a song doesn’t happen in the room naturally without it being guided by someone specifically, when we’re all just feeling the vibe, then it’s not proper and it’s not pure. That’s kind of a dangerous thing because you end up never trying something different, or you just abandon an idea if it doesn’t work at first because you’re always waiting for that thing to arrive perfect. This time there was more of an emphasis on hard work.” So the second half of the album was written by individual members at home under lockdown and brought to the table when it was time to record. Morgan confirms it was an advantage: “The experience this time round was completely the flipside to Schlagenheim. A lot of the material was really fresh but that was something that played into our hands and we relished it.”

After recording one track with Marta Salogni in London the band found themselves in the aptly named Hellfire Studios, a remote Irish facility in the Wicklow Mountains, south of Dublin in summer 2020 under the eye of Lankum producer, John ‘Spud’ Murphyfor the purpose of recording a demo for the album but something clicked. Morgan says: “The studio itself just sounded really natural and after doing a few takes there was a real feeling of, ‘Oh yeah!’ Going into Hellfire we weren’t too sure what the sound we were looking for was but as soon as we got there and had it we knew. Hence the trial sessions ended up becoming the actual album recordings.” Geordie adds: “It worked really well with John. We wanted a natural, open sound combined with fourth wall breaks –for lack of a better expression. Do you know on record when you can hear the tape screeching, the things that make you aware that you’re listening to a recording? [With a lot of records] it feels like either you’re listening to the ECM, high-fidelity, 25 mic amazing sound or you have the lo-fi album full of crazy effects. And I thought, ‘Why not have an album where you combine the two?’ That was one of the main ideas going into it and John was very keen on that idea.”

And you can hear that all the planets aligned for this recording session. Album opener and lead single‘John L’ slaps harder than a dominatrix on a works night out. This might well be a massive Magma-sized sound and driven by some gutsy Discipline-era King Crimson thrust but any comparisons can only be tangential as it’s never been more clear that black midi are one of the few young bands breaking through now who have their own inimitable sound. And some of the huge energy on this track is wrought by the inclusion on violin of Jerskin Fendrix, their pal from the venue where they cut their teeth, The Windmill, Brixton. The ensemble tease the raging track to the point of nonexistence before leading it through caverns of reverb and gauzy snareskin landscapes, just for it to return, hitting hard as hell once more. The story painted is a jet black comedy delivered in stentorian tones about what happens to cult leaders when their followers turn on them. One of the many surprising left turns on the album is the stirring bossa sashay of ‘Marlene Dietrich’. Geordie says: “She was someone who couldn’t really dance, couldn’t really sing, wasn’t the greatest actor and spent all her years in Hollywood on the wrong side of 30, but she had that indefinable but undeniable quality: incredible presence. She embodies the joy of magic and the joy of performance.”

When talking about future single, ‘Chondromalacia Patella’, the band are tight-lipped about which band member actually suffered from runner’s knee (which the title refers to) but confirm it is a song about “convalescence”. The track will wrong foot any listener moving, as it does, assuredly, from abrasive noise rock chords and circular drumming until it finally climaxes in a sunburst of arpeggiated guitars skyscraping above and beyond power metal. ‘Slow’, which pulls off the unlikely coup of imagining a fruitful collaboration between cult mathcore outfit Don Caballero and jazz rock kings Steely Dan, is one of two songs fronted by Cameron and he says while the lyrics don’t refer to anything specifically, initially his lyrical inspiration came from COVID-19 paranoia on theirFebruary 2020 UK tour when the song was first being written but later drew on thinking about counter revolutions, how easy it is to destroy things and how long it can then take to rebuild them.”

The second of Cameron’s track’s is the chiming and introspective ‘Diamond Stuff’ which is named after a brilliant experimental novel by Isabel Waidner and channels the same languid slow core, post rock vibes as The For Carnation before venturing blissfully further and further out into territory that only black midi can currently occupy. He describes the lyrics as concerning “dying and being thrown in a peat bog just to be discovered hundreds of thousands of years later by a mining company”. This, more than any other track on Cavalcade, shows just how assured black midi have become in pushing their studio practice outwards in all directions. The kit list for this song alone includes a cello, a sax, a grand piano, two bouzoukis, a late 19th Century zither called a Marxophone, a flute, a lap steel, synths and a wok. Hold on a second… a wok? Morgan laughs: “With this track in particular there was so much space for scary sounds and little colours to be introduced so I got a lot of percussion out to use. I’d been making a damn fine stir fry during lockdown so that probably inspired me to bring the wok in from the kitchen and play it with a violin bow. We had a lot of fun making this track, trying out lots of cool things.” After the prowling, bristling funk of ‘Dethroned’ explodes into a maelstrom of noise, ‘Hogwash And Balderdash’ is a pure rager calling to mind the berserk prog energy of the Cardiacs and the lysergic funk of Primus seen through the black midi prism. And then the album ends with the epic ‘Ascending Forth’ which dares to dream a 21st Century update of classic folk rock and Rock In Opposition styles; exploding and then reassembling them into a sublime new whole.

Spend some time with Cavalcade and you’ll acknowledge black midi are back with the biggest of bangs.

NNAMDÏ is a multi-instrumentalist composer, producer, and performer. His musical identity was forged in the DIY community of Chicago. Relentless participation in numerous musical projects bridged genres and created inroads between scenes. Near constant activity quickly made him a locus of gravity in the community. Constant participation quickly opened channels to a broad cross-section of the arts world. NNAMDÏ has toured the USA, Mexico Europe and Canada with projects ranging from punk to jazz. A full accounting of his musical activity over the last eight years includes approximately 15 bands and dozens of tours. All the while, Nnamdi has not only released a stream of records and EPs under his name and the ironic moniker “Nnamdi’s Sooper Dooper Secret Side Project”, but also runs his own label called SOOPER Records.

His solo styling combines hip-hop, experimental rock, gospel, and jazz. His songs can often contain a sense of satire that is just as humorous as it is critical. NNAMDÏ‘s lyrical insights draw on the diversity of his cultural experience as a Black, Jewish, first generation Nigerian-American. His work is characterized by the coupling of sophisticated compositional structures with pop-music motifs. NNAMDÏ‘s latest record DROOL is his most mature and accessible work to date. 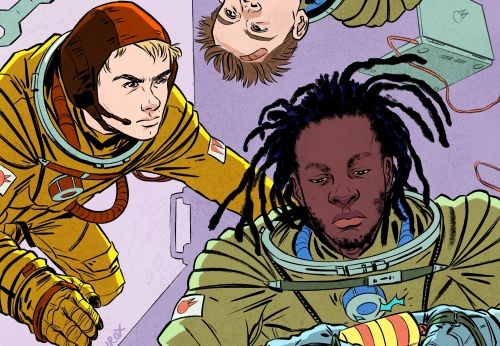