Processing...
Tickets
This event is currently sold out, but we've partnered with Lyte to provide fans a safe and easy way to return or request tickets to the show. Find fan tickets here.

This event is currently sold out, but we've partnered with Lyte to provide fans a safe and easy way to return or request tickets to the show. Find fan tickets here.

Sometimes, a mystical, life-changing connection can be closer than you think.

In 2017, Grammy Award-winning guitarist/producer Adrian Quesada had recorded some instrumentals in his Austin studio, and he started looking around for a vocalist -- he knew a lot of singers, but he wanted something different. He reached out to friends in Los Angeles, in London, but nothing seemed right.

Meantime, Eric Burton had recently made his way to Texas. Born in the San Fernando Valley, he grew up in church and then got heavily involved in musical theater. He started busking at the Santa Monica pier, where he brought in a few hundred dollars a day and developed his performance skills. Burton traveled through the Western states before deciding to settle down in Austin -- setting up his busking spot on a downtown street corner, at 6th Street and Congress, for maximum exposure.

A mutual friend mentioned Burton to Quesada, saying that he was the best singer he had ever heard. The two musicians connected, but Burton took a while to respond (“My friends were like ‘Dude, you’re a mad man, you need to hit that guy back!’“) Finally, he called Quesada, and started singing to one of the tracks over the phone. “I loved his energy, his vibe, and I knew it would be incredible on record,” he says. “From the moment I heard him on the phone, I was all about it.”

The results of that inauspicious beginning can now be heard on the self-titled debut album from Black Pumas, the group that Quesada and Burton assembled, which has become one of the year’s most anticipated projects. Described as “Wu-Tang Clan meets James Brown” by KCRW, Black Pumas were the winner of Best New Band at the 2019 Austin Music Awards.

Quesada and Burton both return, over and over, to this almost mystical connection they felt from the beginning. It’s this sense of common purpose, of shared vision, that gives Black Pumas its focus and power -- and that points to great things ahead.

“It’s so seamless, it’s like we’re musical brothers to some degree,” says Burton. “It feels so easy to meld together that what’s most important for us now is to continue to look for new sounds -- to make sure we’re feeding ourselves the knowledge to continue to evolve. Every time we get together, it’s better than the last time.”

“We went through a pretty dramatic shift with this record,” says Seratones frontwoman AJ Haynes. “The band lineup, the creative process, the sound: all of it changed in ways that really reflected our growth and evolution.”

One listen to ‘Power,’ Seratones’ spectacular sophomore album, and it’s clear just how much of an evolution has taken place. Produced by Cage The Elephant guitarist Brad Shultz, the record finds the Shreveport five-piece trading in the brash proto-punk of their critically acclaimed debut for a timeless brand of gritty soul, one that takes its cues from vintage Motown and Stax even as it flirts with modern synthesizers and experimental arrangements. Haynes’ captivating voice remains front and center here, but her delivery this time around is more measured and self-assured than ever before, a beacon of confidence and clarity amidst a sea of social and political turmoil. Perhaps even more marked than the any sonic development on the record, though, is Haynes’ lyrical turn, which points her gaze inwards for the first time as she grapples with race, gender, and justice, writing with an unfiltered honesty that at once exudes strength and vulnerability, hope and despair, beauty and pain.

“I learned to tap more into my own stories with these songs,” says Haynes. “I came to recognize that I have this lineage and these inherited experiences that are beautiful and worthy of exploration. The more personal my writing got, the more deeply I was able to connect with people.”

Seratones have been chasing those kinds of deep connections since 2016, when they first rocketed into the national spotlight with their breakout debut, ‘Get Gone.’ Rolling Stone called the album a “fitful collision of punk, soul and jazz echoing out of a shed strewn with whiskey bottles,” while Pitchfork praised the collection’s “soulful grease and punky grit,” and NPR hailed it as “lean and compact, with an impressive assortment of anthemic stompers.” The music earned the band dates on the road with artists as varied as St. Paul & The Broken Bones, Thao & The Get Down Stay Down, The Dandy Warhols, and Drive-By Truckers, along with festival slots from Hangout to Newport Folk and invitations to perform on national television and at NPR’s Tiny Desk. 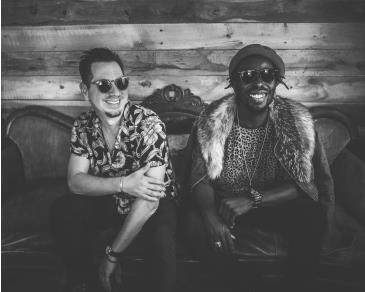