Formed in 2009, Blistered Earth set out to become the definitive tribute to Metallica and have spent the last decade doing exactly that. Hailing from Spokane, Washington, the band hasn't allowed the lack of proximity to big markets slow them down and have built a hardcore and dedicated following by doing exactly what Metallica themselves have done: taking the music to the people. With just shy of 1,000 shows to their credit, Blistered Earth have proven to be one of the hardest working bands in the business, headlining venues all across the western United States & Canada from British Columbia to Arizona, Western Washington to eastern Montana & all points in between.In 2016, the band suffered a major setback when the trailer containing all of their gear was stolen while on tour. In an unprecedented turn of events, news of the theft made its way to none other than Metallica's James Hetfield and he, along with the other members of Metallica, not only made arrangements to have the gear replaced but were gracious enough to provide Blistered Earth the actual gear from their previous tour. Metallica has continued their kindness by welcoming the band as their special guests at select shows and sharing photos with the band on their social media platforms, exposing Blistered Earth to millions of people from around the world.With the consideration and support of Metallica, Blistered Earth continues to pay its respects to one of the greatest heavy metal bands of all time. Every performance guarantees the raw energy, showmanship, appearance and song selections that die-hard Metallica fans require. Blistered Earth is the ultimate tribute to Metallica!www.facebook.com/blisteredearthtributewww.blisteredearthtribute.com 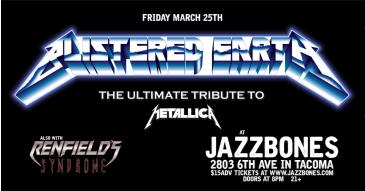