On Friday June 9th, be prepared for a pure unadulterated heavy listening experience as the  “Blood, Sweat, and Bass” tour is smashing through the AVALON as CONTROL is inviting Downlink, Dieselboy, Bare, Mark The Beast, and Aweminus to leave total bass-head annihilation in its wake.

Downlink is a name that’s cemented in the hearts and minds of the bass music community. He is respected the world over as a producer of the highest quality dance floor bangers. He has had numerous #1 hits on Beatport and has released music with major labels like Rottun, OWSLA and Mau5trap, and has even helped mix an album for the legendary nu-metal band Korn. Touring the planet far and wide, he’s left a wake of awe-struck audiences in his path. To see him live is to witness one of the tightest technical DJ's in the game. In 2013, he joined forces with homies Excision and KJ Sawka creating bass music supergroup Destroid. That same year, Downlink launched his brand new record label, Uplink Audio.

At a time when headline "DJs" shamelessly play pre-programmed - even pre-recorded - sets and the masses mindlessly embrace the charade, Dieselboy - The Destroyer - stands out as a rare virtuoso of the art and craft of live DJing.  Dieselboy was the first drum and bass artist to chart a single on Billboard’s dance chart with “Invid” in 2000, and was the first American voted into the UK-based Drum & Bass Arena Top 10 DJs online poll in 2004. In 2002 Dieselboy founded Human Imprint, North America’s most prolific, dynamic and innovative drum and bass label, and is co-founder of SubHuman, under the umbrella of Planet Human. He also toured with Moby’s Area2 and played heavy metal concerts with Orgy and Disturbed. An inspiration for generations of DJs, Dieselboy’s longevity and relevance in a mercurial industry is a tribute to his relentless drive to create “amazing” experiences for his fans at his infamously explosive live shows.

Sean Rodela aka Bare an LA based producer/dj is rapidly becoming one of the biggest names in dubstep. He has had releases on labels such as Ultragore, Basshead Music,Tuff Love Dubs and Play Me. He has worked with the likes of Mark Instinct, 12th Planet, and Datsik and a co-labbed with Borgore. BARE’s dedication to bass music was rewarded with the title of “Best New Dubstep Artist of 2010” by Beatport.

Mark The Beast is a guitar and piano prodigy turned bass producer that has been unleashing serious studio damage. From producing hip hop beats for the likes of Prodigy of Mobb Deep, crafting soundbeds for commercials and movies, and engineering tracks for a huge range of musicians and vocalists, Mark has a lot of irons in a lot of fires. His first release was a collaboration with Excision and Downlink called Go Low. He hooked up Dieselboy and remixed anthems from Sinister Souls and Bro Safari + UFO. They then collaborated on music with the bass super producers Downlink, Mayhem, and Counterstrike. One of the tracks “Carcosa” hit #1 on the Beatport Dubstep chart. After releasing on Dieselboy’s bass label Subhuman, Mark went on to drop huge releases on Downlink’s Uplink Audio imprint. The biggest single “Breathe” was featured on UKF’s 2015 Dubstep compilation. No small feat. Only a few years in the game and Mark has his sights set on worldwide domination. Watch your bass bins…

With Aweminus on call for support, get ready for a night of complex, high voltage sets as Blood Sweat and Bass takes no prisoners. Downlink, Dieselboy, Bare, Mark The Beast, and Aweminus will bring bass music to the AVALON with precision, imagination, intensity, energy and finesse. 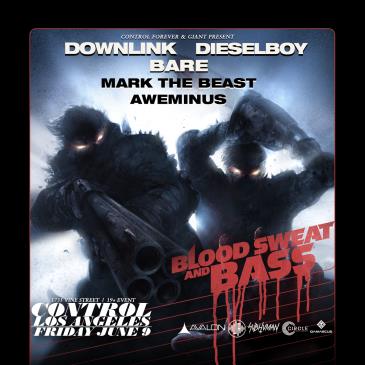