Tuesday, October 25th, 2022
$10 ADV / $12 DOS
7pm Doors
All Ages
Blushing
Blushing features two husband and wife duos consisting of Michelle Soto (guitar, vocals), Jacob Soto (drums), Christina Carmona (vocals, bass), and Noe Carmona (guitar). Jacob and Noe have been lifelong friends that played in bands growing up in El Paso, TX, though they both moved to Austin around 2009, meeting their wives there coincidentally at the same bar (Side Bar). “Naturally all four of us became close friends.” As Michelle was learning guitar, her natural talent to write music started to emerge, creating vocal melodies and guitar parts in her bedroom. Christina, already a classically trained singer, was recruited by Michelle to lend her vocal talents and soon grabbed a bass, taught herself to play and joined in to help solidify the songs. Soon Jacob and Noe began to notice how much potential the songs had so they joined in on a practice session to help flesh out guitar, drums and vocals. From there the husbands never left the group, and Blushing was formed. Their natural chemistry and like- minded musical influences helped solidify their ongoing writing process. The band released their first EP “Tether” in 2017, followed by their EP “Weak” in 2018 with Austin Town Hall Records, and most recently their sold-out, debut self-titled LP “Blushing” on Wallflower Records in 2019.
Lucid Express

Lucid Express is five young dreamers who create a stunning airy blend of shoegaze and indie pop amongst the skyscrapers, mountains, and packed alleyways of Hong Kong. The name itself a modest mission statement of the band’s intent: lucid in the poetic sense of something bright and radiant. 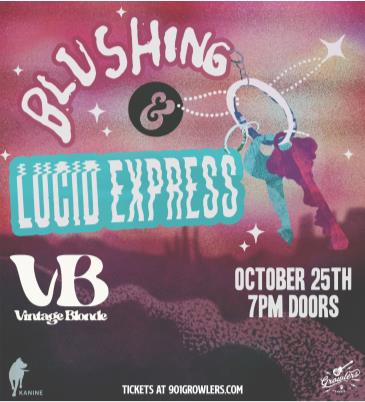