Bob Lennon is a rapper/singer/ songwriter from middle Georgia with an eclectic and versatile sound who began his journey shortly after attending college in south ga on a golf scholarship. “My grades weren’t good because I wasn’t really going to class and golf just wasn’t my thing anymore…like I hated the way I was treated, I guess as a kid of color, well the only kid of color on the team” says Bob. “I started hanging out more with friends ya know smoking and free styling”. Smoking and free styling over hip hop instrumentals  are  both activities that most teenagers and college kids do to pass the time but, Bob was different.

Better and more word savvy than his peers, Bob would quickly come to  realize his true calling. Dropping out in the Spring of 2012 to hone his skills as an artist in the basement of his grandmother’s house that would slowly but surely turn into something for the aspiring artist. Years later Bob would earn himself countless awards from “Best Hip Hop Artist” in Macon, Ga to winning the “FilA Party” In Atlanta, Ga which landed him on a billboard in Downtown Atlanta just walking distance from the Mercedes Benz Stadium. Bob  has been mentioned in Magazines such as “XXL” by rapper Waka Flocka, who Bob later released his first album under, titled “Ashtrays.”

“Ashtrays” is a versatile album that gives his listeners a variety of genres, productions, and emotions throughout the entire listening  experience. From contemporary urban songs such as “If I Was A Girl” that talks about how the roles of men and women are being switched in today’s society. Popular  blogs such as “Atl Top 20” and “Say Cheese Tv” picked up the visual for the record which expanded its attention. “Teach Me How To Fly”, a soulful yet pop style song that Is playful, beautiful, and sweet like a love letter showcases Bob’s songwriting and vocals. He opens up even more to his listeners by giving them a rock styled record titled,  “Ms.American Pie” which landed him in the office of L.A Reid, followed by a standing ovation. This song has over a 100,000 views on its official video featured on Bob’s YouTube Channel. Bob Lennon continues his journey by releasing new music, content, and performing…to keep up with him and his movement simply follow Bob on Instagram @whoisboblennon or become a fan  on Facebook  by liking his “Bob Lennon” page.

Aaforever (AFRICAN AMERICANA) IS THE NAME OF AN AWARD WINNING BAND AND SONGWRITING DUO. SINCE BEING FORMED IN BROOKLYN NY BACK IN 2011, AFRICAN AMERICANA HAS SINCE BECOME A CULT OBSESSION FOR THEIR DARING SOUNDSCAPES- PULLING INSPIRATION FROM ROCK & ROLL, FILM, FASHION AND INTERNET SPAWNED OTAKU SUB-CULTURES . AFRICAN AMERICANA, THROUGH EXPERIMENTATION, HAS THE RIGHT AMOUNT OF ANONYMITY, SYNTH, VICE AND HIP-HOP CULTURE. THE GROUP STARTED AS AN ELECTRONICA DUO LED BY VISUAL ARTIST/PROUDUCER/HIP-HOP LYRICIST ALEXANDER WRATH AND GUITARIST/PRODUCER/SONGWRITER, SUPERIOR.

“From the founders of “478Legacy”, Martaze Blackmon and Mark Wingfield, comes a new age conglomerate dedicated to highlighting the musical and cultural diversity in the Heart of Georgia. After partnering with the lead singer of the local band Hindsight, Caleb Melvin, they scouted out their closet friends and Music partners to create what we now know as “CollectiveSP8CE”, consisting of CharlieZero, SutterKain, JC33011, NATEURBAN, Caleb Melvin, Cult, and Legacy. The band offers a wide range of sounds and background coming together to make what could be considered the sounds of Macon itself. Introducing a heavy hip hop presence perfectly balanced with the historical rock and funk sound has landed the group the ability to reach every avenue with their debut album “SP8CEinvaders”.” 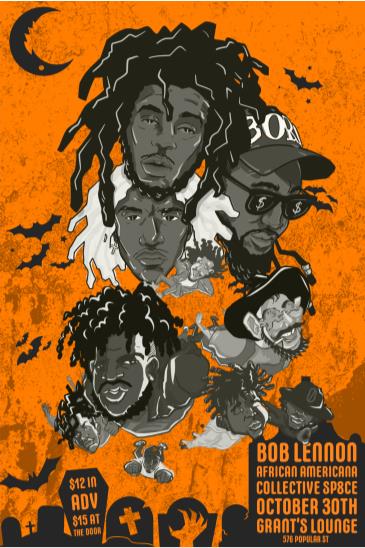