Brendan Schaub is an American stand up comic, podcast host, and TV personality based out of Los

Callen. Together they created a hit show that garners over 10 million downloads a month. The podcast

King and the Sting, in collaboration with his good friend and stand up comic Theo Von. The show has

iTunes its premiere episode. Below the Belt is Schaub’s third show within his podcast empire that he

hosts by himself, which is the number 1 combat podcast in the world. Below the Belt is consistently in

world. The Fighter and the Kid podcast eventually led Schaub to fulfill his childhood dream of being a

stand up comic. He is now a regular at Los Angeles’s most prominent comedy clubs such as the Comedy

Store, Laugh Factory, and Improv. In 2018 Schaub travelled around the world for his “Stay in Your Lane”

tour with sold out shows in Australia, London, Ireland, Canada, and all over the United States from LA to

New York. He most notably sold out the Wilbur theatre in Boston, Massachusetts. After two years of

special, “You’d Be Surprised”, with Showtime. In addition to his successful career in comedy Schaub is

also on Bravo’s “Play by Play”, E!’s “After Party”, Showtime’s “Below the Belt”, Comedy Central’s 7th

season of “This is Not Happening”, David Ayer’s upcoming film “Tax Collector”, and Joe Rogan’s Fight

IMPORTANT TO KNOW
*There is a 2 item minimum per person purchase for all Laugh Boston shows.
**16 years old minimum age to attend with parent or legal guardian.  21+ to drink with valid US ID or Passport required at the door.
***Questions about parking, food, or something else? Check out our FAQ here. ADA requests please contact our Box Office at boxoffice@laughboston.com.
If part of a large party purchasing tickets individually please have one person in your party fill out our Large Party Request Form to help us accommodate your group better. Thank you! 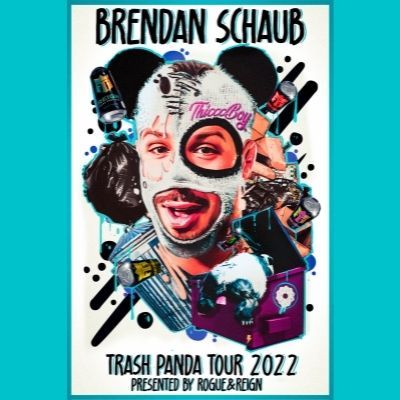