Heather Dawn Bright, otherwise known by her stage name Bright Lights, is an American recording artist and songwriter. She attended Berklee College of Music where she graduated in 2005 before moving to New York City to kickstart her music career as a songwriter. She has written songs for a variety of big name artists like Britney Spears, Usher, The Wanted, and Far East Movement, just to name a few. Her most successful song to date is Justin Bieber’s single “Somebody to Love”, which peaked at #15 on the Billboard Hot 100 charts. Along with her songwriting career, Bright Lights is also well known as a vocalist primarily under the electro/house genre. She has written and recorded several dance hits including Zedd’s “Stars Come Out”, Porter Robinson’s “Language”, Bingo Player’s “Don’t Blame the Party (Mode)” and more.

Coming in hot is Vanessa Michaels, a DJ sure to dominate the electronic atmosphere in the upcoming years. Well known for her light, fun, and bouncy sounds that she implements into her tracks and remixes, Michaels says her sound can be described as a “future of the 90s” beat. Taking inspiration from the 90’s Hip Hop world, Michaels focuses on writing toplines that have the catchiness and flow of the 90s, but will be produced in a unique way that emphasizes a future sound. Michaels is now a LA resident performing all around the beautiful City of Angels, showcasing her talent and unique sound to all.

LA native and self-proclaimed “sound manipulator”, in regards to her rising DJ career, Dirty Rich Kidd. Having grown up in a musically eclectic household, Dirty Rich Kidd is found mixing beats together with cues from DJ AM, A-TRAK, and GirlTalk while her soul beats for sounds from Madonna, Kanye, and 90’s grunge rock. Outside of the club circuit, Dirty Rich Kidd is also well known for using her talents to support her community by donating her sounds and mixes to art gallery exhibits, fashion launch parties, and pride parades and festivals held all over Southern California.

Lastly, up and coming DJ Bryan La Rock will also be a supporting act to an exciting night of dance music mixed between future bass beats and indie house vibes. Stop by Avalon on August 5th to see Bright Lights, Vanessa Michaels, Bryan La Rock, and Dirty Rich Kidd break it down for the night. 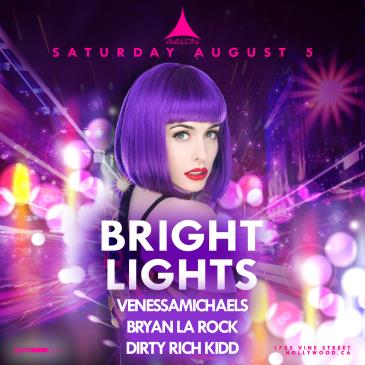