Bluegill Productions at The Concourse

Friday Night Live at The Concourse!

Bruce Katz is a legendary keyboardist (Hammond B3 and piano) who has released 10 CDs as a leader and has appeared on nearly 70 other CDs with the likes of John Hammond, Delbert McClinton, Ronnie Earl, Butch Trucks, Duke Robillard, Little Milton, Joe Louis Walker, David “Fathead” Newman, and many, many others. He has also had a strong musical connection with the Allman Brothers Band, having been a member of Gregg Allman’s band for six years (2007-2013), Jaimoe’s Jasssz Band (2010-2015), Butch Trucks’s Freight Train Band (2015-2017) and Les Brers. Bruce also occasionally toured with the Allman Brothers as well. He is a seven time Blues Music Award nominee (2008, 2009, 2010, 2015, 2019, 2020, 2021) for the “Pinetop Perkins Piano Player of the Year” award, and he won the 2019 BMA for “Best Acoustic Album” for “Journeys to the Heart of the Blues”, recorded with Joe Louis Walker and Giles Robson.
The Bruce Katz Band is an original, very exciting group of musicians that combine Blues, “soul-jazz”, and New Orleans inspired roots music. Based in Woodstock, NY, Bruce Katz occupies a unique space where blues and the many aspects of Americana music collide into a style of original music all his own. The band has a trademark sound, blending the B3 organ and guitar in unique and inventive ways. New members Aaron Lieberman (God Street Wine) on guitar and vocals and Liviu Pop (Lucky Peterson) on drums have added a new dimension and spark to the band. British harmonica player and vocalist, Giles Robson will also be with the band for this show.

This show currently has no COVID safety requirements for attendees. This is subject to change. If this changes we will be sure to update this page as well as notify all ticket buyers via email. 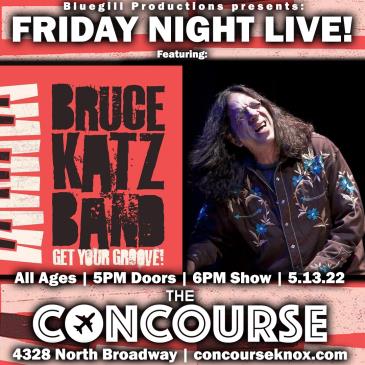