Bumpin Uglies are a band that have hoisted themselves up and forged their own path, but even as they look around at where they are, how far they have come, it is clear to them that there is so much more work to do and they continue to do it every day. With the help of bassist Dave “Wolfie” Wolf, drummer TJ Haslett and keyboardist / master shredder Chad Wright, they are doing just that.

Bumpin Uglies recently came off the road, having to cancel their spring tour due to COVID-19. Brandon and the boys have been keeping their rabid fan group “Uglies Nation” entertained with full band live streams, hosting socially distant concerts and even a few Drive-In concerts until the world slowly gets back to a place where Bumpin Uglies can tour once again.

Fresh off the successful release of full length, “Keep your suitcase packed.”, they are in the midst of a new project called “The Never Ending Drop." The concept is simple, yet groundbreaking..

"For the last ten years, we’ve been on what feels like the never ending tour. So in a year where the tour is forced to stop, we decided to double down on the music making portion of our job description," Hardesty explains. The band released their first single, "Fear," in October and plans to release a single per month indefinitely on the second Friday of each month. Be sure to check out the new material on Spotify or wherever you stream music. 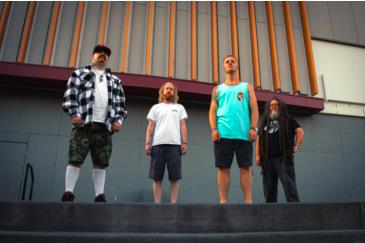