Candy – The band that holds it all in to best let it all out.
Heaven Is Here is the sort of record that some people may like to describe as groundbreaking or genre bending but this kind of claim comes with a caveat. I’ve got good news for the world: you’re no longer able to redefine hardcore. It was always a figment of someone’s imagination anyway and at this point we’re all trying to guess what it even is, let alone how or why to change it. Breaking ground is no longer about formal innovation but about the desperate and frantic hope that you can make sense of as much information in the world as you possibly can at once. Being human, but pulling the worst of yourself out and putting into your music-making might seem like a reckless way to make a statement but for Candy, it works. Heaven Is Here puts together so many chronologically disparate elements with the confidence and care to graft their relativities together under what basically sounds like extreme duress. Their words and music specifically strive to replicate moments of impact and anxiety, obsessive compulsive thinking, and extreme cynicism so that they might not have to effect how to come down from these types of overwhelming feelings on a day to day basis. Negativity-as-productivity fills the sensational energy that Candy have built into their sound and live shows, and now most specifically their latest LP.
What this record does is help to lengthen the floodplain of what can be considered normal. Heaven Is Here shares so much of what people seek out in fractal, defragmented little blips over a lifetime, and slams them together in some kind of audio ballistics gel of heavy music, electronics, and popular culture. Designing this sort of summary into a piece of work seems simultaneously fearful and egotistical, but is better seen as a reflection of the realistic materials at hand. Speaking directly to their incorporation of electronic elements in Heaven is Here, it’s not so much that Candy insist on progression, but that they will not accept regression. In a day and age in which a primary complaint of alienated, disappointed musicians might be that “you can make music on your phone these days,” Candy in turn feel the same but instead, have rushed to run through what they see as an open door through which to make their music better and more filled with intensified chaos than ever before.
Yet still, they feel there is no line to have stepped across between when they began and where they’ve ended up. Just a fuller realisation of the same intent over the span of multiple recordings and a mass of gigs. There is, however, a line through time for Candy. One which permeates all iterations of “extreme” music – from the most simplistic and un-nuanced, to what we now consider the touchpoints of the cannon.
“I find it funny that we sometimes treat old extreme music like Throbbing Gristle or gabber, or Nitzer Ebb as wildly different than other artists working in similar time-frames, like United Mutation, Crossed Out, or Disclose” says guitarist, Michael Quick, who calmly manages to organise his musical intentions with the experience of having to exist in a long long history of sub-genre habituation.
Lyrically, we see a perfect counterpoint to this process of throwing everything at once into the
creative process in order to bring the “rest of the world” with you into the new one you’ve created. The laser focus and short cynical borderline poetics of Zak Quiram specifically set an intention of declarative and pointed thinking. Specifically marking out territory that reminds you that Candy’s world lives elsewhere to the rest of society. In this lies the great connection between the nihilism of their music and the optimism of criticism: “We don’t want to transport the listener from the nightmare of a world we’re living in. We want them to face the harsh and ugly truths in the hopes to spark a thought and use those ideas to disrupt the society we live in.” Facing the worst of things and bringing that into your life as an uncontrollable force is what we have on our hands here, from the moment of its inception, to its capture and completion as an LP.
This is kind of music you think is “normal” after years of abusing your hearing and constantly reassessing what you accept as sounding “good” or “heavy,” learning what sounds bad on purpose, and how to hear what might just be unintentionally genius. Death Metal riffing pressed on a Flexi-disc with flashes of industrial dance dressed up in a low mosh; Raglike bodies clattering around in synch moved by a pummelling din that would extract an instant confession from the most tightlipped spy; A record where the songs feel like a merciful reprieve from the screeching interludes; A masterfully nonsensical almanac of noise welded together by the unpredictable ways that we hear and reproduce the music we love in the era of unending dopamine hits and a virulent technological doom.
Heaven is Here but Hell is on your turntable. 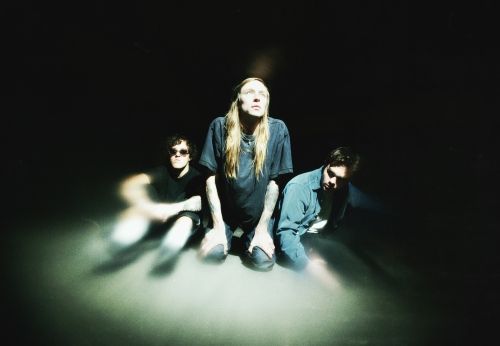