For the past few years, the San Francisco Bay Area’s Cartilage has carried the torch for the endlessly entertaining sound known as gore metal. Borne from the ashes of the brutal death metal act Feast, siblings Teresa and Mark Wallace reigned in their adolescent influences and formed a new band: one that delighted in the kind of flesh-ripping death metal that Exhumed, Impaled and General Surgery once claimed as their own." https://cartilagegore.bandcamp.com/

Laceration: Death/Thrash from the North Bay. "It’s the kind of crushing chug that came roaring out of the late ‘80s and into the early 90’s, where death metal and thrash metal converged and bands like Demolition Hammer, Solstice, and Pestilence were delivering benchmark releases." https://lacerationbayarea.bandcamp.com/

FROLIC: Bay Area thrash revival. Straight from the thrash metal furnace that is the San Francisco Bay Area, FROLIC is here to open up the pit with the kind of energy you’d expect from an Exodus, Blind Illusion or (as the band’s monicker suggests) Death Angel. Formed in 2016 by Edgar Sanchez (Guitar/Lead Vocals), the band currently features Zak Kufeld (Bass/Backing Vocals) and Elijah Post (Drums). In 2019, FROLIC released their Debut EP, Cry of the Demon. New material, which is already causing madness in pits across the Bay, is coming soon… https://frolicbayarea.bandcamp.com/ 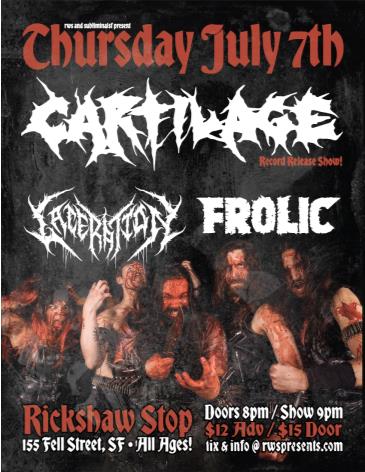