CHARLIE WINSTON - As I Am

CHARLIE WINSTON - As I Am
support tba

As I Am, Charlie Winston's 5th album, the first for the Tôt ou Tard label, was conceived at a particular moment: behind the closed doors of lockdown, and under the permanent injunction of social distancing and observance of preventative measures. A happy paradox, as the English singer appears here with no mask and had never really been one for self-exposure. “The album title, As I Am, has the value of a mantra. It's a way of reminding myself of who I am now and that letting go doesn’t mean giving up" says the man who caused a sensation in 2009 with the hit Like A Hobo, revealing a strong folk and rock musical identity, as well as a character drawn to vagrancy, entirely oriented towards a quest for the self and the need for others. At the time, a fast track to success opened before him, unfortunately quickly blocked by serious health concerns that were so bad as to lead him in 2015 to consider ending his career. Three years later, however, Square 1 was released, a sign of recovery and a new beginning. “If  Square 1 was the conception phase, As I Am is the birth phase. There is continuity between them. This one continues in a similar vein: exploring who I am, questioning some of my certainties. I needed that to feel free." The recording of Square 1 was distinguished by the presence of guests as prestigious as kora player Toumani Diabaté, and tabla player Aresh Durvash. As I Am will be equally groundbreaking with its association – as unexpected as it is fruitful – with Vianney. Their duet, Shifting Paradigms, crowns the collaboration, and alone sums up the album's spirit. “The common thread is about letting go, accepting your own limits. Being a multi-instrumentalist, having recorded 7 albums and being successful, in the long run you get an idea of yourself that needs to be corrected. Hence the need to let go. Although he is 10 years younger than me, Vianney understood this issue. There was nothing between us that needed to be protected. The working relationship was extremely natural and rich." https://www.charliewinston.com/

* There's a 6 ticket limit per customer/account/household/email/credit card/address. Orders exceeding the 6 ticket limit subject to cancellation. Orders place for the sole purpose of resale will be cancelled. * 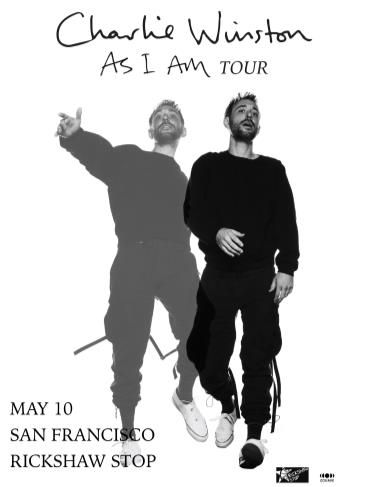