Cultural appropriation. Misogyny and racism. Social media vanity. Post-colonialism and political correctness. These are not talking points that you’d ordinarily hear on the dancefloor but Charlotte Adigéry and Bolis Pupul are ripping up the rulebook with their debut album Topical Dancer. The Ghent-based duo, who broke out with their 2019 Zandoli EP on Soulwax’s record label DEEWEE, are rare storytellers in electronic music: they take the temperature of the time and funnel them into their playful synth concoctions – never didactic and always with a knowing wink.

Their new studio record – which cements them as a duo under both their names for the first time and is co-written and co-produced by Soulwax – is both a triumph of kaleidoscopic electro-pop and “a snapshot of how we think about pop culture in the 2020s.” It captures Charlotte and Bolis’s essence as musical collaborators and the conversations they’ve had over the past two years on tour, as well as their perspectives as Belgians with an immigrant background, Charlotte with Guadeloupean and French-Martinique ancestry and Bolis being of Chinese descent. http://charlotteandbolis.com/ 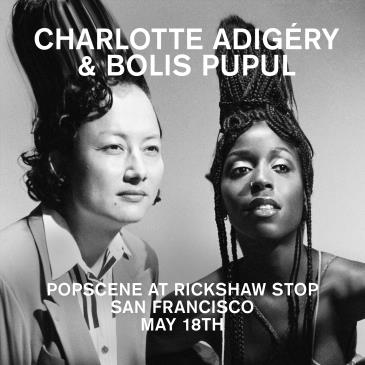