Come 2021, Chatham County Line will have been a stapleof the North Carolina music scene for over two decades. Embracing theheart-worn songwriting and rough-hewn voice of leader Dave Wilson the band hasgraced stages all across the U.S. as well as Europe, Scandinavia, Ireland andthe United Kingdom. With eight studio albums of original material to pull from,CCL has a sound all their own and a stage show to match. Songwriter,guitarist and vocalist Dave Wilson pulls tunes out of an ether that is inspiredby a shelf bending collection of vinyl records from the 1920’s to the 2020’s.One listen to their all covers release “Sharing the Covers” from 2019 will giveyou an idea of those inspirations, with songs from the likes of Wilco and Beckshared with those of John Lennon, Tom Petty and John Hartford.

With the recording of 2020s Yep RocRecords release StrangeFascination the band decided to push their sound a little bit more intothe modern world and embrace the use of drums both in studio and onstage. “We’vehad drums on several albums, most notably Wildwood, and our audiencealways responded well to those tunes” says Dave Wilson. John Teer who rotatesfrom Mandolin to Fiddle all while singing soaring harmony adds “We’vedone an Electric Holiday Tour for the past 12 years that features an expandedgroup of musicians on the stage so we’reno stranger to a backbeat.”

Following their critically acclaimed 2017 debut and a string of singles in 2020 their evolution is made plain on their sophomore LP, Stranger Again, released May 7, 2021 on Sleepy Cat Records. The album has received enthusiastic attention from tastemakers including No Depression, American Songwriter, FLOOD Magazine, Talkhouse, and INDY Week among others.

Stranger Again is a deep dive into Cosmic American music, with the band taking their sound into ambitious new planes, where country-rock meets light psychedelia as the soaring vocals meet twangy slide-guitars and propulsive bass-lines. The otherworldliness of the music is a perfect contrast to their distinctly grounded, human storytelling lyrics. Throughout Stranger Again, they explore loss and longing, self-love and reckoning with personal, political and human struggles.

Their finest work yet, Blue Cactus resuscitate a fleeting style of honest-to-goodness country music considered valueless to a “new” country music where songwriting is officiated by financial analysts and teams of marketing plutocrats instead of woebegone troubadours. With a high lonesome twang, an Emmylou-like southern drawl, and blistering guitar techniques, Blue Cactus’ new record Stranger Again exercises the honky-tonk muscles to firmly bear the flag for a new generation of classic country practitioners. 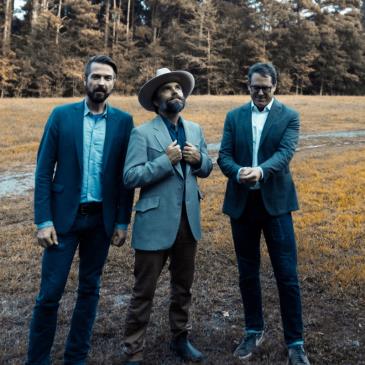