With their individual strengths and unbending friendship, the members of Campbell Station have a bond that drives them and elevates their music. Featuring alternating lead vocals from Campbell Magallanes and Elaina Campbell, complex harmonies, and Seth Ferguson’s unique instrumental arrangements, Campbell Station never fails to deliver an exceptional and entertaining live performance.

In 2019 the trio released country/pop EP South, played the CMA Fest Spotlight Stage and Nashville’s famed Bluebird Café, and co-wrote and performed “Pray for Rain” for the film Five Women in the End. With concerts on hold in 2020, Campbell Station recorded a series of live performance videos with Maple House Sessions. The band also released their latest EP, West, which continues the story from South, but with a western rock vibe. Seth released solo EPs as Sethaferg called Endless and Starless in 2020 and 2021, both featuring songs with Campbell and Elaina.

In 2021 the band began touring again, and their ballad “I’ve Been Drinking” was featured in the film Faye. Campbell Station will continue to explore musical genres and styles with their next release North (pop), and future release East (acoustic, inspired by blues and folk). 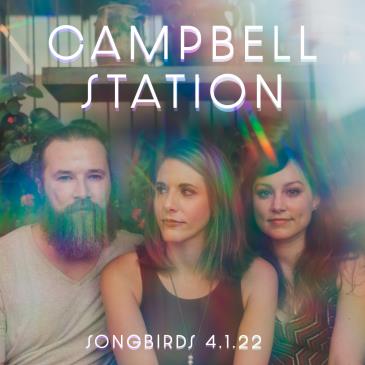