Ferocious and uncompromising in their execution, CARCASS’s ability to intricately dissect the innards of death metal, and display them for us to sonically understand has been their point of excellence for over three decades. Last December (2019) the band released their first single in over 5 years “Under The Scalpel Blade,” followed by a 4 song EP entitled Despicable (October 2020), setting a potent precedent for the full length album to come in 2021: TORN ARTERIES. With the album title itself referencing an old demo created by original drummer Ken Own back in the 80’s, TORN ARTERIES sits as a bookend on the modern side of the CARCASS discography, connecting directly back to where everything began over 30 years ago.

The album artwork also rings reminiscent of the grotesque photography that appears on classic CARCASS album covers like Reek Of Putrefaction of Symphonies of Sickness. Artist Zbigniew Bielak traveled outside his normal wheelhouse to bring forth a time lapsed set of photos showing vegetables shaped like a heart, rotting over time upon a white plate. This form of artwork was influenced by Japanese Kusôzu, meaning: ‘painting of the nine stages of a decaying corpse.’

“It’s very clean, white, which we’ve never done before,” explains Vocalist and Bassist Jeff Walker, “it doesn’t look evil, or typically death metal, but I like how clean it is; almost like a coffee table book.” This new album presents images, lyrics, and sounds that so distinctly scream CARCASS, but ferry us into a new era of production, songwriting, and art all together.
“I think as our 7th album, it does stand out from the others both sonically and stylistically,” explains Walker. “You can definitely tell that it’s CARCASS; when you drop that needle on the vinyl, when you hear that guitar tone, you can tell it’s Bill Steer, but each album is always a product of its time.”

With TORN ARTERIES, each track stands unique from the rest in its approach to guitar, bass, vocals and drumming, along with all the finer details. Filthy and dominating guitar work creates thick layers of tone and melody, piling on top of each other like the weight of dead flesh in tracks like “Kelly’s Meat Emporium.”
“The working title for Kelly’s was originally ‘Stock Carcass,’” laughs Walker “we knew that one was a real meat and potatoes track for the album.” Meanwhile the elevated speed and catchy beat in “Dance of Ixtab” tell a robust and airier story, one that is certain to get a reaction from live crowds. “We built this song around the beat,” explains Walker, “we had an approach to each song that was a definite idea. It’s all about ‘what haven’t we done before?’”

Curious about the lyrics? CARCASS bets you are, but don’t expect them to be an easy puzzle to solve. Over the years metalheads the world over have referenced CARCASS’s complex, bizarre, and gore filled lyrics with affection, humor, and fascination. This time around will require fans to actually purchase the physical album, and closely examine the artwork in order to place the lyrics in their proper order. “I’d rather people spend time actually going through the record, listening to it, taking the words out as they hear them, and from there try to draw their own conclusions of what the lyrics are, instead of delivering them on a plate,” chuckles Walker.

Recording and Production for TORN ARTERIES wasn’t as simple as sitting down for a few weeks and knocking it all out, but rather spread out over the course of approximately 1 year bouncing back and forth between England and Sweden. Initially, drummer Daniel Wilding did session work in Sweden at Studio Gröndahl with David Castillo while guitars were recorded at The Stationhouse with James Atkinson in Leeds, England. Eventually needing some form of residential location to finalize vocals, bass, and other guitarwork, the band headed back to studio Gröndahl in Sweden to continue work in a very relaxed atmosphere with Castillo. “There was no real big plan to do it this way, the process just organically grew on its own,” says Walker.

Most will find that the only real struggle when indulging in TORN ARTERIES is fighting the desire to start it over the second it finishes. It covers substantial new ground for a band with such a reputation, while still retaining that addictive, time honoured CARCASS sound that has come to represent the face of true death metal.

IMMOLATION is a name long synonymous with the extreme music scene, delivering some of the most unique and creatively dark death metal the underground has witnessed over the past 32 years. Their latest release, “Atonement” (Nuclear Blast), proved that this is one band that does not look back, continuing to push the limits and remaining a vibrant force for the future of a genre they helped define.

Since the release of their debut album “Dawn of Possession” (Roadrunner) in 1991, IMMOLATION has been paving their way down an ever-evolving path of uncompromising musical devastation! Never a band to rely on their previous efforts, IMMOLATION has continued album after album to refine and hone their most identifiable style and sound, creating some of the darkest and most adventurous death metal the scene has ever heard. With such classic albums as “Here In After”, “Failures for Gods”, and “Close To A World Below” (Metal Blade), as well as their more recent critically acclaimed releases, “Unholy Cult”, “Harnessing Ruin”, “Hope and Horror”(ep) and “Shadows In The Light” (Listenable/Century Media), the band has developed into one of the premier extreme acts of our time.

2010 saw the next step in IMMOLATION’s evolution with its Nuclear Blast debut, “Majesty and Decay”. With the release of “Majesty and Decay” IMMOLATION not only surpassed their previous releases musically, but had started a new chapter in their career with the added mix/mastering talents of Zack Ohren (Castle Ultimate Studios). Together with long-time producer Paul Orofino (Millbrook Sound Studios), the combination proved to be the key to some of the most powerful sounding IMMOLATION material to date! Not only had IMMOLATION taken their abilities so much further, with some of the most disheartening musical landscapes the band has ever created, but the sound and production were taken to new levels as well, unleashing all the unrelenting force the band truly offers! With their most solid production recorded at that time, accented by the remarkably stunning artwork of then newly recruited Par Olofsson, “Majesty and Decay” became an instant classic!

Not too long after, 2011 saw the release of IMMOLATION’s second ever ep entitled “Providence” (Scion A/V). This five-song ep of all new original tracks was released by Scion A/V (Toyota) as an online free download, available for fans worldwide. Free cds and vinyl were only available during the band’s U.S tour for this ep, making it an even more sought-after release! Overall “Providence” proved again that the combination of Orofino & Ohren, with Par Olofsson once again at the artistic helm, was a team to keep! Production and artwork were once again some of the bands best.  “Providence” was not just an ep, it proved to be a five-song mammoth that found itself on top release lists for that year! With IMMOLATION creating an interesting collection of avant-garde, yet extremely catchy songs” Providence” set the tone for where the band was heading, and a taste of what to expect from their next full length lp.

With 2013’s “Kingdom of Conspiracy”, the band took things to another level of intensity. With this, the band’s second full length record for Nuclear Blast, it was clear that IMMOLATION had found themselves at their most refined and strongest point to date. “Kingdom of Conspiracy” was without a doubt their most complete, menacing, and grimmest culmination of musical madness the band had ever released! While conceptually taking a dim and bitter look at the realities of our world today, adding an Orwellian twist to its not so distant future, all our fears are soon realized in this soundtrack that mirrors our world more than we choose to accept. And with speeds and intensity beyond anything the band had recorded before, “Kingdom of Conspiracy” became an instant classic to both their fans and piers.

February 2017 saw the release of “Atonement”, the band’s 10th full length album, their third for Nuclear Blast Records. “Atonement” was truly a defining moment for IMMOLATION, having some of the most mournful orchestrations the band have dared to delve into, redefining themselves once again and coming out holding the torch high! An unrelenting collection of catchy, intense and darkly imaginative tracks, each song on “Atonement” is a testament to the pure style and creativity that makes IMMOLATION who they are. Each song on this record is uniquely different from the next, with each one incorporating so many of the classic IMMOLATION elements that put this band in a league of their own when it comes to extreme metal. “Atonement” is an album that takes the listener on a musical journey that touches on all the extremes; the slow and heavy, the fast and savage and the dark and haunting. “Atonement” is hands down the band’s best produced release in their 32-year history. Recorded once again at Millbrook Sound Studios with producer Paul Orofino, mixed and mastered by Zack Ohren (Castle Ultimate Studios), and once again featuring the amazing cover artwork of Par Olofsson along with additional artwork by the very talented Zbigniew Bielak, “Atonement” truly had extreme music fans foaming at the mouth! With pinpoint accuracy and violent melodic prowess, and lyrical content touching on the dark realities of humanity and the world we have created, the epic feel and dominating power delivered by “Atonement” was able to please fans of death/black metal and all extreme music!

On the success of “Atonement” IMMOLATION conquered the world stages from 2017-2019, touring relentlessly through almost every continent on the planet! With extensive runs taking the band throughout North America, Europe, Central America, Asia, Australia, South America and Japan, the band performed hundreds of dates in theatres, clubs and open-air festivals worldwide…bringing their unbridled live energy to thousands of metal fans!

Now, while the world continues to wait for a return to normalcy, IMMOLATION prepares for their new album. And be certain, a dark and powerful album it will be! For once again, as proven before, these seasoned artists of darkness plan to go beyond all expectations, both musically and in their future live shows, to bring their listeners senses burning down to the ground in a pile of ash…thanking IMMOLATION for every minute it took them to get there! 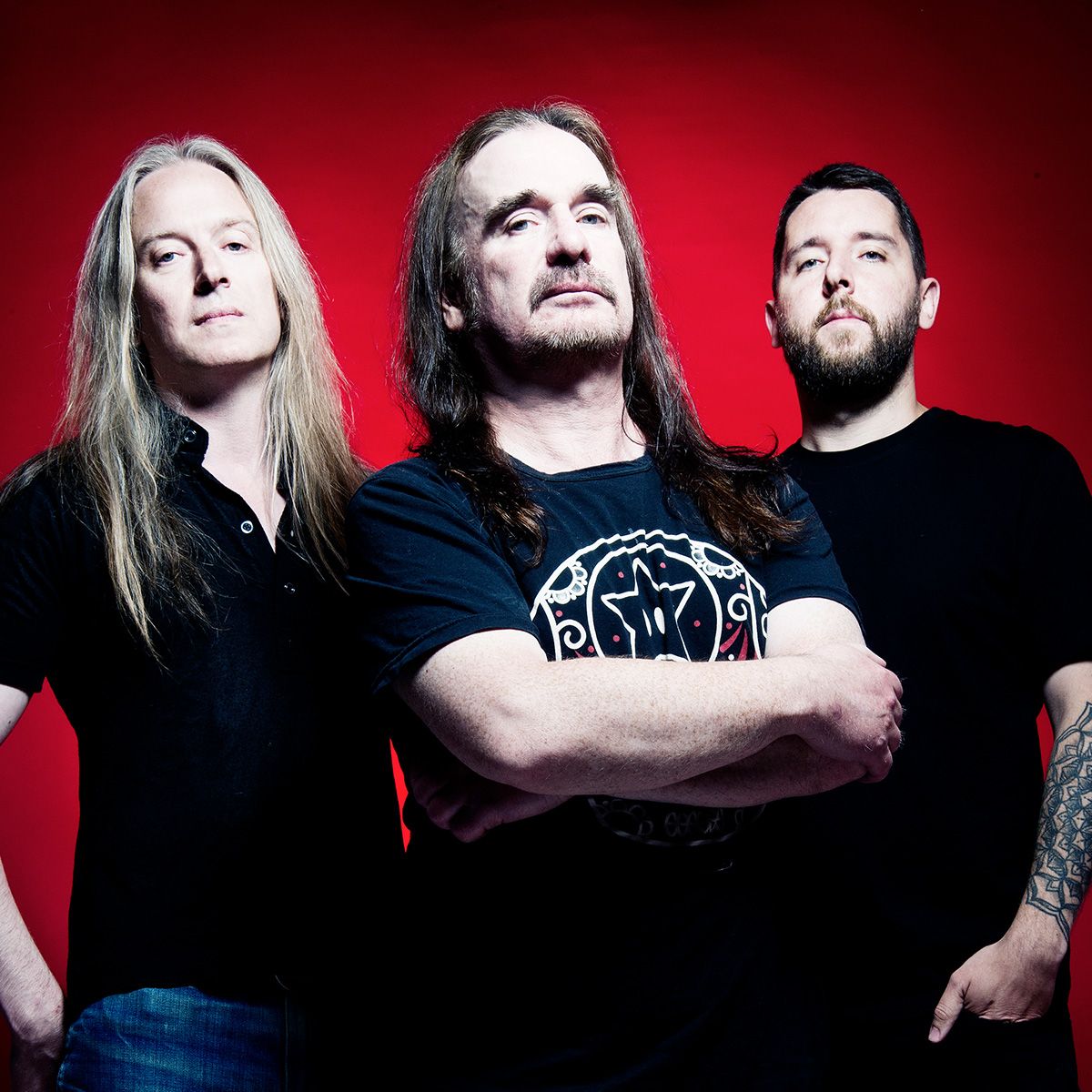