Capitol Theatre at The Creek Stage at the Rookery

Blending folk intimacy, country grit, and alt-rock muscle, Carolina Story’s resilient new
album, Dandelion, is an ode to survival in the face of struggle, a full-throated tribute to the
power of hope and the unbreakable bonds of family. Recorded with acclaimed producer,
songwriter, and multi-instrumentalist Paul Moak (Joy Williams, Ashley Monroe), the
collection is fueled by raw, honest storytelling and lush, cinematic arrangements,
expanding the homespun craftsmanship of the Nashville duo’s debut to draw on a broader,
more ambitious palette, one that hints at everything from The Jayhawks and Lucinda
Williams to R.E.M. and Nirvana. Though the record was written over the course of the last
few years, the songs here feel eerily prescient given the current state of the world,
reflecting on loneliness, depression, and economic hardship with the kind of vulnerability
and empathy that can only come from lived experience. Much like the dandelion, though,
Carolina Story insist on reaching for the light with their music. After more than a decade
in the business, it’s all they know how to do.
“There’s just something about the dandelion that spoke to us,” says Ben Roberts, who
shares vocal and songwriting duties with his wife, Emily. “It’s this humble little plant that’s
so tough it can grow through cracks in concrete. It’s an underdog, just like us.”
Launched in 2009, Carolina Story built their reputation the old-fashioned way, performing
countless shows from coast to coast during a whirlwind six-year run that saw them gracing
stages from the Grand Ole Opry to AmericanaFest. After taking a temporary break from
the road to welcome two children into the world, the duo returned in a big way in 2017,
signing with the record label Black River Americana to release their studio debut, Lay Your
Head Down. The album was a critical hit that helped land the band dates with the likes of
Hayes Carll, Bob Schneider, and Delta Rae, among others, and prompted Rolling Stone
to declare them an “Artist You Need To Know.” 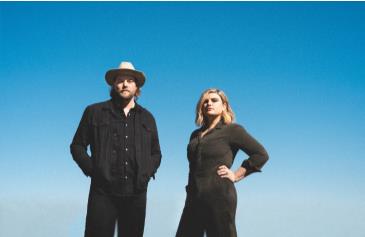 The Creek Stage at the Rookery