A native of West Virginia, Charles Wesley Godwin makes cinematic country-folk that's as gorgeous and ruggedly raw as his homeland. It's Appalachian Americana, rooted in Godwin's sharp songwriting and backwoods baritone. With 2021's How the Mighty Fall, he trades the autobiographical lyrics that filled Seneca for a collection of character-driven songs about mortality, hope, and regret, putting an intimate spin on the universal concerns we all share.

When the global pandemic brought his touring to a halt, he set his sights on How the Mighty Fall, creating the album during a period that also witnessed the arrival of his son and the migration of his growing family back to West Virginia.

"I try to write with a sense of place," he explains. "Up until now, that setting has always been my home, but I don't think this new album is as locally-focused as my previous release. I hope these songs will connect with people wherever they live."

Charles Wesley Godwin has never been afraid to blur the lines, and How the Mighty Fall proudly straddles the borderlands between several genres. It's a country album by an Appalachian-borne folk singer and blue-collar believer, laced with enough electricity to satisfy the Saturday night revelers and enough scaled-down acoustic balladry to soundtrack the slow, gentle pace of Sunday morning. This is music for campfires and car rides, for pool halls and mountain peaks, for big-city diehards and small-town loyalists. It's Charles Wesley Godwin at his best, diving into character studies and richly-created fiction while still offering glimpses of the man behind the music. 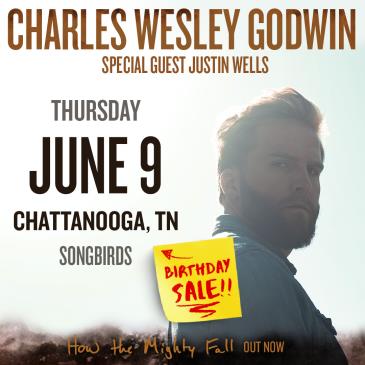