A night of music from Charlie Kogen with performances from some surprise special guests!

Ever since he sat at the piano for the first time as a toddler, Charlie Kogen has followed his heart, his mind, and his musical ears in many directions as an instrumentalist, a singer, a songwriter, and a producer. He grew up playing piano, singing in choir, and listening to artists ranging from Earth, Wind & Fire to Sinatra to Green Day in the car with his parents. In high school, he honed his musicality, studying jazz piano, experimenting with production on Logic Pro, and of course, writing songs. Just turning twenty years old, Charlie has had an original song featured on television, performed at the Kennedy Center, released an album of original songs he wrote in high school, put out two singles since starting college, and has more self-produced music on the way! As a musician, Charlie often draws inspiration from ages past, but as a lyricist, he often ponders the questions of the future. His work as a singer-songwriter earned him recognition as a National YoungArts Finalist and a Presidential Scholar in the Arts in 2019. 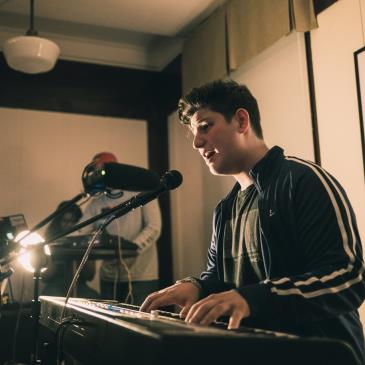