On her new album SUCKERPUNCH, singer/songwriter Chloe Moriondo inhabits an entire cast of unruly characters: a larger-than-life vigilante who collects ill-behaved boys like figurines, a champagne-popping Barbie doll with its hair chopped off, a champion boxer stepping into the ring in a satin pink Hello Kitty robe. Expanding on the untamed imagination and volcanic emotionality of 2021’s Blood Bunny—a critically acclaimed album that landed on best-of-the-year lists from the likes of The New York Times—the 19-year-old Michigan native uses that whirlwind storytelling as a vessel for self-exploration, uncovering potent truths about self-image and obsession and the complexities of power. When matched with SUCKERPUNCH’s high-voltage sound, the result is the most gloriously uninhibited work yet from a truly one-of-a-kind artist.

“As I was writing these songs I allowed myself to get a lot more free-form with the lyrics, which helped me get out of my own head and focus on creating something that felt fun and exciting,” says Moriondo, who recently graced Billboard’s prestigious “21 Under 21” list. “Writing from different perspectives made it so much easier to let go and stop limiting myself, and also helped me to release some things from my subconsciousness without really even trying.”

The third full-length from Moriondo, SUCKERPUNCH marks a bold leap forward from the understated indie-pop and jittery pop-punk of Blood Bunny, often echoing the sheer unpredictability suggested in its title. “I’ve always thought boxing was a cool way to get out aggression, and I liked the idea of naming the album for something that means an unexpected hit—something you never saw coming,” Moriondo notes. In shaping SUCKERPUNCH’s forward-thinking and fantastically brash brand of pop, she worked with producers/co-writers like Oscar Scheller (Rina Sawayama, Charli XCX), David Pramik (Machine Gun Kelly, Oliver Tree), and Teddy Geiger (Caroline Polachek, Olivia O’Brien), embedding the album’s glossed-up production with idiosyncratic details (including, at one point, beats built from the guttural roar of barking dogs). But despite that seismic shift in sonic direction, Moriondo continues to imbue each track with diary- like honesty, a quality that’s earned her a global fanbase of millions in the past few years alone.

At turns campy and confessional, tender and explosive, SUCKERPUNCH kicks off with “Popstar”: a deliciously off-kilter track that pays adoring homage to the pop queens who inspired much of the album. “My vision for ‘Popstar’ was to make a Britney Spears/Kesha baby that sets the tone for the whole record,” Moriondo says. “I have so many childhood memories of Kesha in particular—playing her songs on my little purple iPod Nano when I went rollerskating, or dancing to her music in my bedroom with my two best friends in high school. I can’t think of many artists today who embody her same energy.” From there, SUCKERPUNCH launches into the sticky-sweet escapism of “Fruity,” a gang-vocal-fueled anthem primed for ecstatic screaming-along. “With ‘Fruity’ the goal was to capture the feeling of being on the beach with a bunch of cute girls in bikinis, sipping sodas and eating ice cream and frozen fruits,” says Moriondo. “I really wanted to have a summer song under my belt, and it fell together so naturally.”

While songs like “Fruity” radiate an unstoppable joy, SUCKERPUNCH also shines a bright light on the darker corners of Moriondo’s psyche. “I was incredibly angry when I wrote some of these songs, and felt so sick of being perceived as a soft person,” she points out. Along with “Trophy” (a hilariously scathing track

Moriondo refers to as “a song for girls who want to feel better about themselves, and maybe go key somebody’s car”), the album’s more blistering moments include the frenzied catharsis of “Plastic Purse.” “That song is the most fun I’ve ever had writing lyrics—it’s me getting my anger out about stupid indie boys who take advantage of girls, picturing them as these tiny little creatures that I scoop up and then throw into a plastic purse,” says Moriondo. With its feverish beats and fast-shifting tempos, “Plastic Purse” rushes forward with a reckless velocity as Moriondo calls out all those “bonehead Cheez-It brains,” building to a supremely cheeky outburst at the chorus (“Rub the lamp, you want it, I’m a genie/I’m a punisher, call me Phoebe”).

As the album unfolds, SUCKERPUNCH slowly reveals the immense depth of Moriondo’s sensitivity—an element in full display on “Celebrity,” a sardonic yet soul-baring commentary on the toxicity of fame. “There’s definitely a big contrast between the aggression and confidence of the start of the album and the sadness and desperation of the later songs,” says Moriondo. “I wrote ‘Celebrity’ at a time when I felt

nervous and strange about the idea of vying for attention or wanting to be exciting and appealing to an audience, and it became one of the more vulnerable songs on the record, to the point where I had to really warm up to the thought of releasing it.” Next, on “Cdbaby<3,” Moriondo offers up a delicate piece of drum-and-bass that perfectly channels the ache and frustration of unrequited love (“Now some songs make me sick to my stomach when I hear ‘em/How’d I let you ruin one of my favorite albums?”). “When I was writing that song I was having complicated feelings for a dude who doesn’t mean much to me now,” says Moriondo. “But I guess a big part of him not meaning much anymore has to do with working it all out in the song.” And on “Cry,” SUCKERPUNCH closes out with its most heart-on-sleeve moment, setting the song’s raw outpouring against a gorgeously glitched-out backdrop. “If ‘Cdbaby<3’ is a chill exhale, then ‘Cry’ is the very loud exhale at the end of the album,” says Moriondo. “It’s me venting about the fact that I’m so emotional all the time, but also recognizing that it’s okay to cry a lot and get upset too easily. Because sometimes you’ve just got to let it all out, even if it’s hard.”

In creating her most outrageously singular body of work to date, Moriondo experienced a major breakthrough with the writing of “Hell Hounds”—a magnificently unhinged anthem that continues the canine-themed narrative begun on their early-2022 EP puppy luv. “I wanted to make something fun and aggressive that everyone could punch the air to, and it turned out to be a really strong first step for the overall direction of album,” she recalls. From that point forward, Moriondo followed her wildest impulses to such sublimely warped tracks as “Hotel for Clowns” and “Dress Up” (a hypnotic piece of left-field pop they sum up as “a party song for girls who want to be Barbie dolls but never really felt like one”). Naming pop iconoclasts like Ashnikko, Charli XCX, and SOPHIE among the inspirations for SUCKERPUNCH, Moriondo also deliberately strayed from the self-contained process she first adopted upon writing songs on ukulele and guitar in their early teens and later brought to their debut album Rabbit Hearted. (a 2018 release whose breakout success soon led to her signing with Fueled By Ramen). “For this album I collaborated with a lot of people I’d worked with on Blood Bunny—people who I knew would throw lots

of great ideas at me, but who wouldn’t be too precious with those ideas,” she says. “Instead of getting caught up in trying to make something brilliant, we focused on experimenting with different styles and genres and approaches to the lyrics, having fun with it and letting ourselves get a little silly whenever it felt right.”

In sharing SUCKERPUNCH with the world, she hopes to leave her audience with a similar sense of lighthearted abandon. “I want people to interpret this album however they wish—take it and love it and dance with it, or sit with it and chew on it and spit it out,” says Moriondo. “Mostly I hope it makes them feel empowered to do whatever the hell they want to do, and not ever worry about what other people might think.” 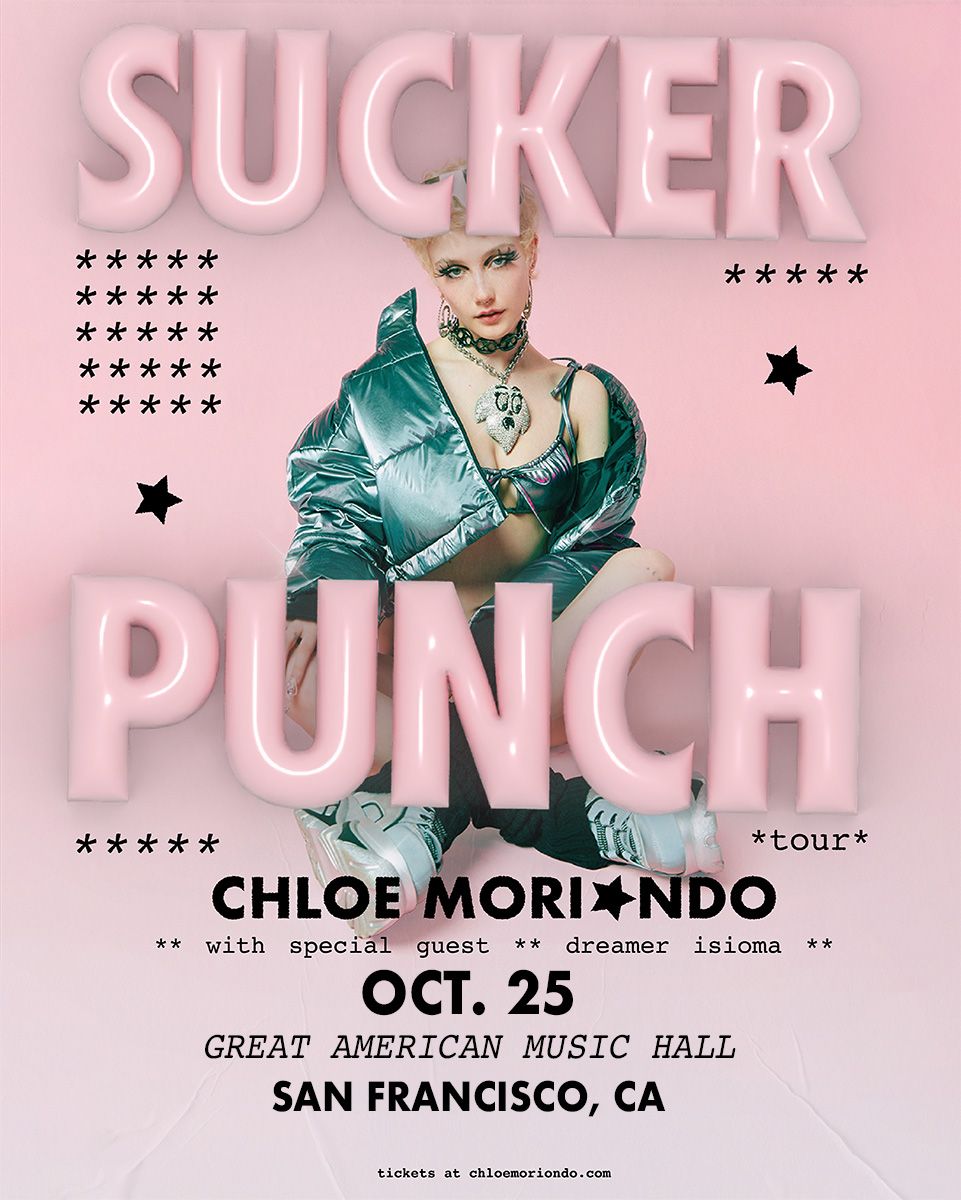