Claud has partnered with PLUS1 so that $1 per ticket goes to supporting The Ally Coalition and their work to provide critical support for organizations dedicated to bettering the lives of LBGTQ youth.

Claud
Website | Facebook | Instagram | Twitter | YouTube
From beginning to end, the sparkling pop tunes off Claud Mintz's magnetic first album, Super Monster, capture the assorted stages of a relationship's delight and dejection -- the giddy sensation of a first kiss during the beaming "Overnight," the heartsick longing of a pending rejection during the yearning "Jordan," the reluctant call for a requisite breakup during the smoldering "Ana."

"I'd write about how I felt in the moment, then two months later, a year later. My perspective evolved on one relationship with the same person," Claud says. "I changed so much that it feels like a different person writing some of these songs -- but it's just me."

The debut release on Phoebe Bridgers' Saddest Factory Records, Super Monster is a vertiginous but joyous coming-of-age reckoning with such young love. Claud sees relationships as games of endless wonder, intrigue, and second-guesses, a roller-coaster thrilling you even when it's terrifying. If "Gold" turns the tension and indecision of a bad match into an undeniable bit of lithe disco, "That's Mr. Bitch To You" uses a spurt of righteous indignation to fuse a little soul and emo into one breathless hook. Super Monster is like a compulsive compilation that Claud culled from a lifetime of musical enthusiasms -- the arcing alt-rock of '90s airwaves, the rapturous pop of '00s chart-toppers, the diligent genre-hopping of modern online life. Claud emerges as the chameleonic mastermind of this mélange, channeling all of love's emotions into songs so sharp they make even the hardest times feel fun.

During the Summer of 2018, Claud released an EP under the name Toast, their duo with Joshua Mehling, Claud's best friend since their first day at Syracuse University. The band was casual but enthusiastic; Claud would spend whatever time remained between classes writing to beats, eventually opting to skip classes to give these burgeoning tunes more attention. They were stunned when anyone else responded, especially when Terrible Records released their debut EP during Toast's second semester. What would happen, Claud wondered, if all their time could go to music? Claud soon left Syracuse and subsequently settled on this new solo name. "Leaving school," Claud says, "gave me space and time to become a better writer. And I knew no one could explain me better than I could."

Claud's life and output became feverish. Though based in New York, Claud would visit their mother in California and father near Chicago or go on tour and make new friends. More than 50 songs emerged during that brief span, reflections on the flings and loves of life as a young artist. Early in 2020, Claud decamped for a few months to their father's home, the same place Toast had finished its debut. Claud sorted through those dozens of pieces, whittling them down to the baker's dozen that shape Super Monster.

Claud finally emerged from that Midwest cocoon, heading to New York to record at Electric Lady Studios exactly 50 years since Jimi Hendrix's first session there. For years, Claud had fantasized about working at Electric Lady, so they recruited a wide network of close friends and new collaborators to finish Super Monster. Mehling played on and co-produced several tracks, including finale "Falling With the Rain." That enchanting closer is performed by Shelly, a friendship band consisting of Claud, Mehling, Claire Cottrill, and Noa Getzug. Nick Hakim harmonizes on "Ana," while Unknown Mortal Orchestra's Jake Portrait adds synth and guitar. These friends and more buoy Claud, lifting their tender songs skyward.

On the final night of work at Electric Lady, studio manager Lee Foster called to ask if Claud liked Daniel Johnston, the late and legendary songwriter whose artwork he manages. Foster arrived on bike a few minutes later, brandishing a scan of an unpublished Johnston painting called "Claud & the Supermonster." A person sprang from the grass -- a monster maybe, but absolutely jubilant all the same. The image resonated with Claud's own quest for an individual identity as a queer person, sometimes bound up in feelings of isolation. Claud asked Foster if they could title the album Super Monster as an ode to Johnston's kindred outlook. The cover Claud painted -- a stunningly surreal self-portrait, as rich as these deceptively sophisticated songs -- offers an homage to Johnston's universe and a kind of introduction to Claud's own world.

Perhaps you are in the throes of one of these romantic moments yourself right now, resentful of a frustrating paramour like Claud during "Pepsi" or indulging in lust like "In or In Between." Or maybe these songs recall those wild days and tough situations. Incisive, instant, and addictive Super Monster works on either level -- to remind us of love's wild ups and downs or to help us deal with them in real time.


KALI
Facebook | Instagram |  YouTube
"I don't know how anyone could not like music," says KALI, the 16-year-old singer, multi-instrumentalist, and producer whose debut EP Circles is coming soon. A few years ago, KALI began writing and recording glistering, catchy indie-rock songs in the bedroom of her family home, a rent-controlled apartment in Santa Monica, until she received a noise complaint and moved to a small lockout studio. "Landlords don't like rent-controlled tenants," she says, regretfully. 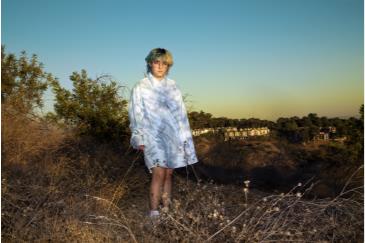